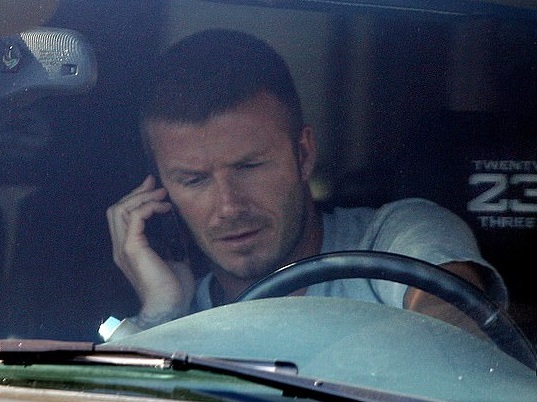 Texting in traffic like David Beckham isn’t the only offence that could see British motorists have their license taken away, drivers have been reminded.

Driving specialists from LeaseCar.uk have highlighted what constitutes using a mobile phone behind the wheel, along with other unsafe conduct that could see Brits banned as well as fined.

It comes after the former England international footballer was hit with a six month ban from the roads yesterday, for using his mobile phone while driving his Bentley through London’s West End last November.

The penalty for using a mobile phone at the wheel doubled a couple of years ago to £200 and six penalty points – enough to disqualify those with less than two years’ experience.

Most motorists will be fully aware that driving while under the influence of drink or drugs, without insurance or an MOT, or at excessive speed could see them removed from the roads, but other offences can also lead to a driving ban which could even be immediate.

The rich and famous may be able to cope without their own car for a while, but the inability to drive could jeopardise most Brits’ employment opportunities and leisure time.

Tim Alcock from LeaseCar.uk said: “Every road user knows that speeding and getting behind the wheel without insurance or an MOT is not safe and could see their driving license taken off them.

“But many other motoring offences could see a disqualification imposed, either straight away or via points accrued.

“As David Beckham’s case has emphasised, it’s always unwise, distracting and dangerous to use a mobile while driving.

“We’re reminding Brits that you don’t have to have the device held to your ear or be typing to be committing an offence, so don’t hold your phone for any purpose while the engine is on.

“We’ve also highlighted some other common road habits that could see UK drivers facing a ban, on top of a fine.”

It’s not just texting at your knees like the football superstar – tweeting, snapping and calling could land Brits in court and facing a driving ban like Beckham.

Answering your phone on speaker is still an offence if you’re holding the device in any position or if it causes a distraction.

It’s also illegal to use hand-held mobile devices as sat navs unless they’re fixed to your windscreen or dashboard, whilst even using a phone’s contactless payment system at a drive-thru could see British drivers banned from the road unless they turn the engine off.

Serious instances of careless driving can result in motorists having their driving licence seized, while any infringement of this law could see penalty points handed out which may add up to a ban from the roads.

Hogging the middle lane on a motorway, driving with steamed up windows and with a distracting pet on your lap or beside you could all land UK drivers in legal hot water.

Swerving between lanes because you’re distracted by changing radio stations or adjusting the sat nav and getting too close to another road user while eating or drinking could, too, see you banned.

Even listening to music via your headphones or having an animated conversation with passengers could be considered careless driving if it reduces your concentration on the road.

Brits who drive dangerously could and should be slapped with an immediate disqualification to keep sensible vehicle owners and pedestrians safe.

But even trying to beat another car off the mark when a set of traffic lights change to green could be considered aggressive and dangerous driving.

Driving too slowly so as to cause a hazard to other vehicles, overtaking when it’s not completely safe and using the hard shoulder, including on a smart motorway unless explicit permission is given, could also fall into this category.

This offence covers driving unsupervised or without L-plates on a provisional licence, using a class of vehicle you’re now qualified to and without a licence or underage.

An ‘01’ restriction on the back of your licence though, means that you must always wear glasses or contact lenses when behind the wheel and that failure to do so could land you in court.

Failure to wear a required hearing or communication aid, use necessary modified steering and carrying an excessive load or number of passengers could also lead to penalty points and a driving ban.