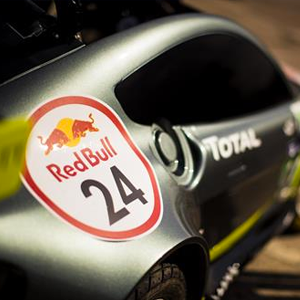 With an extensive ten-minute testing programme for the GTE racer complete, the team headed to Alexandra Palace in the knowledge that at the very least, they’d deliver an entertaining run.

After scoring well in the morning’s creativity competition with 28 points of a possible 40, the team wowed the judges and crowds with a pit stop that 24 Hours of Le Mans winners Aston Martin Racing would be proud of. Featuring both Le Mans winning drivers Darren Turner and Jonny Adam at the front of stage, the pit crew whipped the crowd into a frenzy as they joined the Turner and Adam wielding confetti cannons as wheel guns and champagne bottle water pistols to soak the crowd on the baking hot day.

Alex Summers, Aston Martin Prototype Engineer and driver of the mini V8 Vantage GTE said, “Everything about the day was incredible and the run itself was a memorable experience.

As the driver, the best thing about not being in the performance at the start was that I was able to see everything happen around me. It was a truly chaotic pit stop but the crowd really seemed to enjoy it!

After scoring a maximum score in the performance of 40 points, it was down to Alex who took to the hill achieving the top speed seen in testing of 29mph and grabbing extensive air time on each of the four obstacles.

Summers added, “Once I’d seen that we’d received a good score from the judges for our performance, my nerves at the thought of driving in front of over 20,000 people completely disappeared and I was able to really enjoy the atmosphere.

I was surprised by how hard the drops were and the swimming pool was particularly tough on me and our little soapbox! I could tell the front of the chassis was hitting the tarmac losing us time and speed on every landing, but it looked and felt pretty spectacular from the cockpit which is what it’s all about.

Red Bull know how to put on a great event and to be involved in the 2017 Red Bull Soapbox Race was a special experience. We just came to have some fun and that’s exactly what we got. Thanks to the team who did a great job building the soapbox with me. We started as colleagues but we’ve finished this event as great friends. That’s the best thing about this whole project!”.