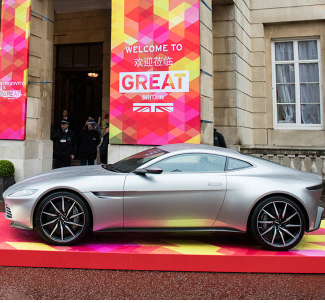 Ahead of its imminent debut in the forthcoming James Bond film, Spectre, the Aston Martin DB10 has today taken pride of place outside London’s Lancaster House – the venue for a meeting between the Duke and Duchess of Cambridge and visiting Chinese President Mr Xi Jinping.

The luxury British sports car – built exclusively for Bond and limited to just ten examples – was on show as part of Aston Martin’s ongoing support for the British government’s successful GREAT Britain campaign, which showcases the best of what the UK has to offer to inspire the world and encourage people to visit, do business, invest and study in the UK.

Their Royal Highnesses Prince William, Duke of Cambridge; Catherine, Duchess of Cambridge and President of The People’s Republic of China, Mr Xi Jinping, were at Lancaster House for a creative summit hosted by the government’s UK Trade & Investment department (UKTI) as part of the President’s three-day State visit to Great Britain.

Aston Martin is a key supporter of UKTI’s GREAT initiative, and has provided examples of its luxury sports cars for display at a number of the campaign’s functions around the world.

Aston Martin have been producing iconic Bond cars since 1964, with their cars appearing in 11 of the franchise films.