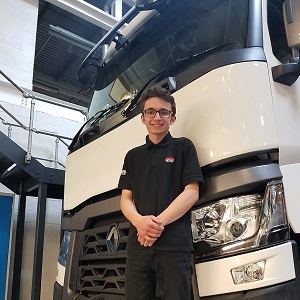 For the first time, two apprentices from Renault Trucks UK dealerships have reached the Semi-Finals of the WorldSkills UK – Heavy Vehicle Technology Competition.

The duo – Joe Durkan of JDS Trucks & Vans (Leeds) and Ben Rogers representing Sparks Commercial Services (Swindon) – took part in the initial rounds, beating over 100 delegates from across the UK’s apprenticeship programmes, to secure their place in the last 18 and will now go on to compete in the semi-finals in Loughborough in July.

Adam Plastow, Commercial Academy & Apprenticeship Manager says: “This is the first time that two Renault Trucks apprentices have made it through to the semi-finals stage.  We have worked relentlessly to develop the Renault Trucks Apprentice Academy into a cutting-edge training programme using the most up-to-date equipment and tools and getting two students into the semi-finals is the ultimate testament to all the hard work of both Ben and Joe and to all involved in developing our programme.” 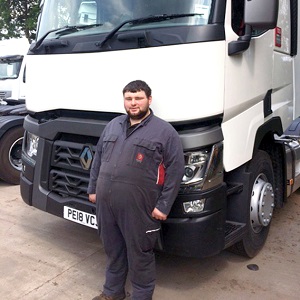 The initial rounds tested Joe’s and Ben’s theory-related heavy vehicle knowledge and the semi-finals will put their practical knowledge to the test with six tasks including engine diagnosis, transmission systems, body electrical, braking system & inspection; with the top 6 from the 18 progressing to the UK Final at the NEC in November.

Michael Spark, Director, Sparks Commercial Services said: “Ben joined our company in August 2015 straight from school and I can quite honestly say that I have not met such a determined and conscientious apprentice in my 30 years in the transport industry. He is always keen to learn and goes out of his way to take on board additional skills wherever he can. He never shies away from a problem; instead he sees it as a challenge. There is no doubt that he is a master technician of the future and will have a long a prosperous career within the transport industry. All at Sparks Commercials wish him all the best in the competition and we are sure that he will do well.”

Mark Griffiths, JDS Trucks & Vans Dealer Principal says: “Everyone at JDS Trucks is absolutely delighted that Joe has made it through to the semi-final of the highly prestigious UK Skills competition. Joe joined us as an apprentice in 2015 and has absolutely flown through his technical qualifications. For his competence and skill to be recognised externally is great recognition for Joe himself and a great advert for the quality of training provided through Renault Trucks as the competition covers all makes of vehicles. We will be rooting for him at the next stage and we hope to see him in the final itself.”

Nigel Butler, Commercial Director of Renault Trucks UK & Ireland added, “Ben and Joe’s achievement is proof of the outstanding quality of Renault Trucks technicians. It is also testament to our dealers who continually invest in and nurture talent to create a thriving culture of professional development that makes the Renault Trucks network such a great place to work.”