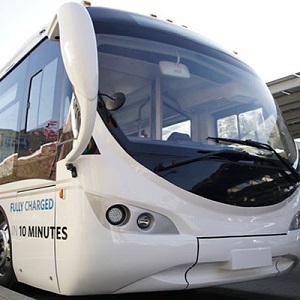 The 27-foot all-electric AVM EV27 bus takes about the same time to recharge as it does to fill a gas tank on a similar vehicle.

A different chemistry is behind the rapid charging time. The cells have forsaken the traditional lithium ion composition of cellphone, laptop and electric vehicle batteries for lithium-titanate. So-called LTO batteries are less energy dense than lithium ion, but they can withstand faster charge rates and last longer — for more than 20,000 charge cycles.

Fast charging means the bus can use a smaller battery. The one powering the EV27 is less than 50 kilowatt hours — only slightly larger than the battery pack on a typical all-electric passenger car like the Nissan Leaf.

In addition to the EV27, AVM will also offer the electric shuttle bus in 21- and 33-foot lengths.

The buses are designed for loop-based routes on corporate and school campuses, and at hotels and airports — applications “where charging for 10 minutes every few hours makes the range of the vehicle functionally unlimited,” Brennan said.

Brennan prefers measuring efficiency in miles per minute rather than miles per charge. By that metric, an AVM shuttle could travel a couple of hours, stop for a quick recharge and keep going. That reduces the number of charges required compared with an overnight or multiple-hour charging scheme.

The first batch of AVM shuttle buses will be made in Zhuhai, China. But Brennan said AVM can accommodate customers that are required to buy American by building at partner facilities in Atlanta and Fort Worth, Texas.

The EV27 is the result of a five-year joint venture with the Chinese company, Yinlong Energy. Yinlong has used LTO batteries on a range of commercial vehicles in China, including buses and vans that collectively add up to “tens of thousands of units and millions of miles” on the road, Brennan said, AVM is Yinlong’s exclusive North American partner.

AVM is part of the Los Angeles Cleantech Incubator project. Brennan said AVM already has purchase commitments for more than 250 vehicles, some of which will be in its Los Angeles home market.

Over the next year, Brennan expects AVM to also move into two ancillary businesses — building the 350-kilowatt charging infrastructure to support its EVs, and energy storage.

“Even after the vehicle service life is done, the battery has a second life in energy storage,” said Brennan. “That’s going to be a growing market now that we’re moving to renewables.”