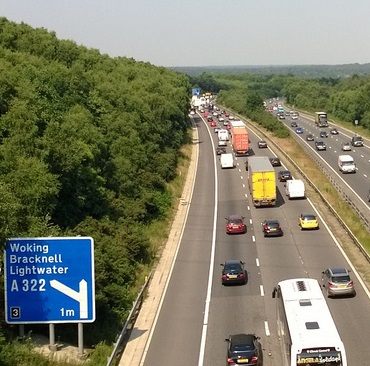 LIMIT: M3 limit could be slashed to 60mph

A 60mph speed limit could hit a three-mile stretch of the M3, as the government strive to meet strict EU pollution regulations.

The limit, which aims to satisfy EU air quality guidelines coming into force this year, affects the 2.8-mile section between junction 3 (Lightwater) and junction 4 (Farnborough).

According to Highways Agency plans, the stretch will become a ‘smart motorway’, with the hard shoulder of both carriageways being converted into a traffic-carrying lane.

However, emissions from the extra traffic during peak hours would exceed local air quality limits – meaning a 60mph limit may be required between 7am and 7pm.

A consultation is already taking place on reducing the speed limit on a 32-mile stretch of the M1.

David Bizley, Technical Director at the RAC, said: “This should really not come as a surprise.

“It does, however, come hot on the heels of the first announcement and invites the question as to whether any of the eight other planned all-lane running, smart motorway schemes which the government have heavily invested in will also need to have reduced speed limits put in place to protect air quality?

“News that the restriction should lead to higher average traffic speeds on this stretch is something of a consolation for commuters, but others who travel outside of peak times will no doubt wonder why they can’t drive at 70mph on a clear motorway.”

Motorists have until April 11 to comment on the M3 proposals.

Image courtesy of paul_appleyard, with thanks.