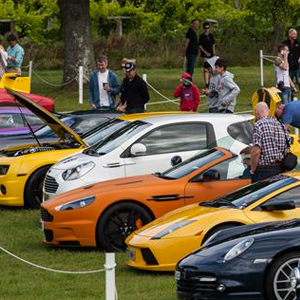 Get set for high octane excitement at Beaulieu’s Supercar Weekend on August 5th and 6th, with up to 600 incredible supercars due to take part in the show.

See these legends of road and track as they rumble into the grounds of the National Motor Museum for the action-packed two-day show, then be amazed by jaw-dropping demonstration runs and special displays.

Watch a selection of these incredible machines take part in demonstration runs on both days of the show, as their drivers test their acceleration and braking on Beaulieu’s Chestnut Avenue.

The thrills don’t stop there, with the Supercar Sound-off taking place at 2pm on both days. Listen out for spine-tingling exhaust notes, as up to four awesome-sounding cars are measured with a decibel meter. Then head to the lawns of Palace House for a very special display by Classic Insurance Services, with 20 of the most desirable cars ever built on show.

Fans of the legendary Ford GT will be in their element, with a rare chance to see the latest road-going version of this American supercar parked up next to its race-bred track version. Compare these dream cars up-close.

Battle of the Brands will bring together jaw-dropping motors from the world’s leading supercar-building nations in the grounds of the National Motor Museum. See these wildly different but equally awesome supercars facing down their competition across Beaulieu’s giant globe.

Look to the Italian display for world-leading performance cars, including the Ferrari 488 GTB, Lamborghini Huracan and Maserati GranTurismo, while the Mercedes-AMG GT S, BMW i8 and Porsche GT3 RS will all be flying the flag for Germany. The British camp will also be chock-full of stunning machines, including the McLaren 720S, Bentley Continental, Aston Martin DB11 and Jaguar F-Type SVR.

Don’t miss the events fields, where scores of supercar owners will be parking up their stylish and powerful machines for all to see and admire. Variety is guaranteed, so keep your eyes peeled for rare and unusual examples. The Lotus Driver’s Club and Club Lotus will be joining forces for a memorable drive-in, while Porsche Club Great Britain will also showcase members’ cars.

Please note that due to high demand, no supercars can be accepted on the day without a prior confirmed booking. If you’re too late, why not come as a visitor to enjoy this year’s show and then apply early for the 2018 Beaulieu Supercar Weekend?

Included in the admission ticket is access to all of the Beaulieu attraction, including the National Motor Museum and its collection of more than 250 vehicles, the World of Top Gear, On Screen Cars, century Beaulieu Abbey, Palace House – which has been home to the Montagu family since 1538 – and its stunning grounds and gardens.