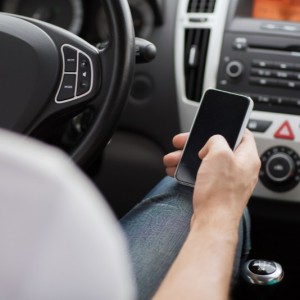 All are things you can do on a mobile phone, which goes some way to explaining why the number of motorists caught using a phone has hit an all-time high. A recent study reported 80% of 10,000 vehicles stopped by police as part of a week-long crackdown on mobile phone use last November 2016 were found to be guilty of the offence.

But after a string of high profile cases following fatal crashes involving an unsecured mobile, the government has had enough. From 1 March, penalties for drivers who use their mobile phones while driving have doubled to six penalty points and a £200 fine, even if it is their first offence.

To reinforce the point, police ramped up enforcement against people using their mobile phones while driving in advance of the new measures.

Some companies are already well ahead of the curve on this very 21st century problem. Companies such as Ocado have gone a step further and banned the use of hands-free mobile phones as well – because they can also cause a huge distraction.

The online grocer isn’t the only firm to have gone this far. A few months ago the Post Office also introduced a blanket ban on drivers using hands-free mobile phones as part of a wider programme to keep its drivers safe on the road.

These initiatives are encouraging – particularly when you also see a headline proclaiming nearly a quarter of young drivers have had an accident or near miss in the last 12 months due to being distracted behind the wheel.

In fact, driver distraction has become one of the biggest risks in road safety. EU data shows that distraction is a contributory factor in up to 30% of collisions, while research from transport consultancy TRL found that reaction times of drivers talking on a hands-free phone to be 50% slower than driving under normal conditions.

If you feel alarmed reading this, it could be time to consider developing a driver distraction policy. Consult with employees and encourage them to provide input and feedback as this will help them feel engaged with the process and creates a level of ownership.

Once the policy is in place it needs to be backed by communication and education – make sure managers commit and lead by example. And make sure all sign the policy to prove they have understood their role in complying with it.

All employers have a duty of care to ensure that employees and members of the public suffer no unreasonable nor forseeable harm as a result of work-related activities – a driver distraction policy will play a crucial role in your duty of care.