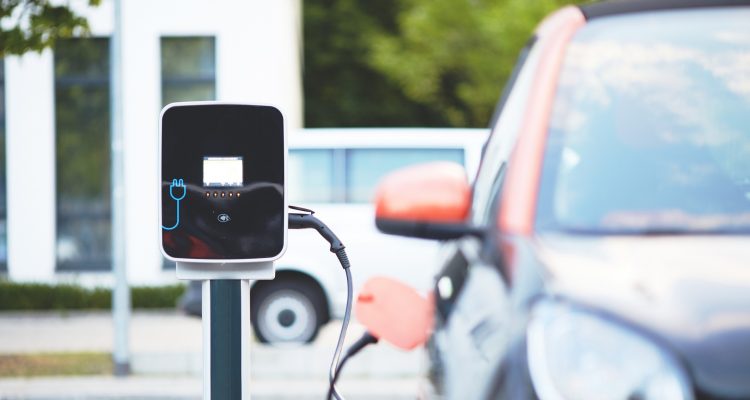 UK will fail to deliver the EV infrastructure needed by 2030

In the face of rapidly growing competition for electric vehicle (EV) chargepoints, inadequate support from both central and local government is threatening to put the brakes on the UK’s zero emission transition. So finds a new report released today from leading car financier Novuna Vehicle Solutions, which casts doubt on whether the government’s target of installing 300,000 devices by 2030 is achievable, and uncovers growing discontent amongst EV drivers.

The Electric Vehicle Ecosystem (EVE) Report, which includes insights from over 2,000 motorist interviews, together with in-depth analysis of public data, reveals that the number of electric cars chasing every public chargepoint has grown threefold in just three years, rising from a ratio of 5:1 in Jan 21 to a ratio of 15:1 in Jan22. This national average masks some significant regional disparities, with drivers in the South-West (32:1) and North-West (28:1) having the hardest time finding a charger, unlike Londoners who benefit from comparatively good provision (5:1). 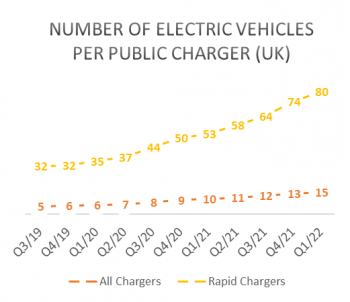 The rapidly growing competition for public chargepoints means that one in three (31%) EV drivers now frequently have to queue for a charger, with many wishing there was greater attention paid to their plight. Three in four (76%) report that based on their experiences of EV ownership, the UK’s current charging infrastructure is simply unfit for purpose.

Despite this growing divide between the supply and demand of public charging infrastructure, three in five (59%) drivers of petrol or diesel (ICE) vehicles say their next car is likely to be an EV. Novuna predicts that this future demand will result in more than half of UK adults being EV drivers by 2030, the date when the sale of new petrol and diesel vehicles will be phased out. This would equate to 54 EVs vying for every public device by 2030 – even if the 300,000 public chargepoint milestone is reached.

Consequently, it is not surprising that the clamour for off-street parking amongst EV drivers means that two thirds (68%) say they would never buy or live in a house without the space to install their own chargepoint.

Jonny Berry, Head of Decarbonisation, Novuna Vehicle Solutions said: “Demand for EVs has accelerated at a relentless pace, yet we’re rapidly facing the prospect of failing to realise the level of adequate public charging infrastructure to support mass adoption of EVs by the start of the next decade.

“The Government vows to have 300,000 public chargers installed by 2030, but with just 32,000 devices in the ground today, our research puts into question whether this target is achievable. It has taken ten years to reach this milestone – we must now build the same number in a single year – and then repeat that feat every year until the end of the decade.

“However, even if we manage to hit this magic tenfold number, we expect to see the ratio of cars to chargers will increase from 15:1 to 54:1, and that’s going to mean a lot more competition for charger provision; competition which is already being felt today in many parts of the country, unless the new government reignites investment in this area.”

For the majority of motorists, the onus is on the public sector to accelerate the rollout of charge points. Four in five EV drivers (81%) want the Government to do more to boost the number of chargers in the UK, and virtually the same proportion (79%) want their local authority to do more. Petrol and diesel drivers agree (71% and 68% respectively), wanting to see better provision before they make the switch.

Jonny Berry continued: “Our findings highlight how the charging network is not only a cause of frustration for EV drivers, but also the millions of petrol and diesel drivers looking to transition to electric sooner rather than later. Having to queue for a charge is a concern raised all too often by motorists, illustrating just how pressing it is for more charge points to be installed as a matter of urgency. Without radically transforming existing infrastructure addressing charging anxiety, the road map to net zero will undoubtedly extend beyond 2030.”

Despite these shortcomings, the vast majority of EV owners say they enjoy driving their vehicles and can’t imagine ever driving a traditional car again. Three quarters (78%) of EV drivers say their next vehicle will be an EV of some kind with younger generations most eager to make the switch.

Four in five (79%) 18-34 year olds aspire to drive an EV as their next vehicle compared to two thirds (64%) of 35-54 year olds. However, enthusiasm is more muted with greater resistance to change amongst older drivers; only a third (34%) of over 55s plan to go electric.