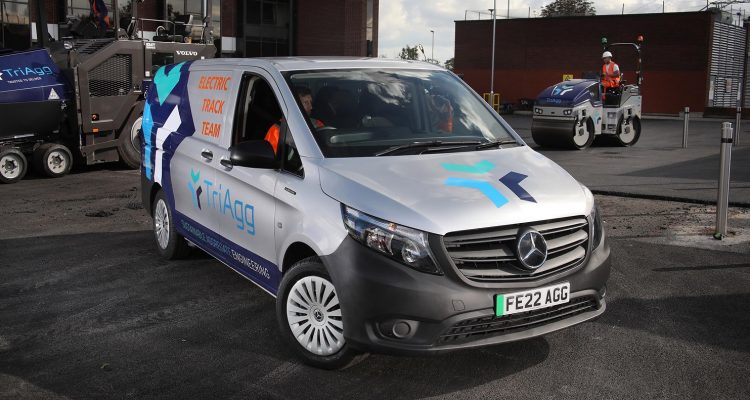 TriAgg charges ahead with all-electric eVito 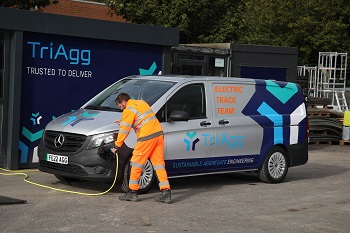 The eVito has joined a fleet of 20 Mercedes-Benz vans – comprising Citan, Vito and Sprinter models – the vast majority of which were delivered by the same Dealer in the last couple of years.

Although TriAgg is based in High Wycombe, Buckinghamshire, Managing Director Dave Dawe sees nothing unusual about choosing to source his vehicles from the official Mercedes-Benz agent for Northern Ireland.

“I bought my first van from MBNI shortly after we set up the business in 2020, and have stuck with them ever since,” he said. “Initially I contacted the Dealer because I’d seen an online advertisement for a vehicle for sale from stock, which was exactly what I was looking for. Sales Executive Chris Boyd was extremely helpful throughout the purchase process – he was always available and happy to talk whenever I called.

“He stayed in touch even after the van was delivered so as soon as I was ready to order our second vehicle, I knew there was no need to look any further. Chris and the MBNI team have continued to look after us courteously and efficiently ever since. When you find someone who’s willing to go the extra mile you stick with them, which is exactly what we’ve done.

“So when we decided to invest in our first electric vehicle, I knew I could trust Chris to give me all the right advice, and would not have considered going anywhere else. In fact I’ve since recommended MBNI to a friend who has since taken delivery of his own new vans and is delighted to be enjoying the same excellent service.” 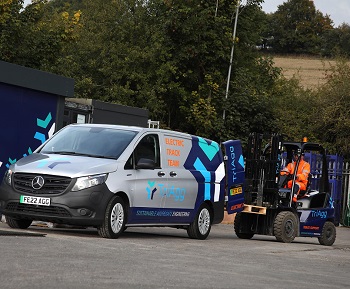 TriAgg has remained loyal to Mercedes-Benz vans too, thanks to Mr Dawe’s experience of running a vehicle fleet as Managing Director of a national surfacing company before launching the new business venture with partners Andrew Maidment, David Foster and Thomas Bell.

“I was responsible for more than 40 vans, and the experience taught me that Mercedes-Benz vehicles are the safest and most reliable on the market,” he recalled.

“The Sprinter and Vito models for which I was responsible never gave me any problems. It was also remarkable that despite several vans being involved in road accidents, their occupants invariably escaped with only the most minor injuries. When I started building my own fleet, therefore, I was only ever going to choose vans with a three-pointed star on the front.”

The new eVito arrived at TriAgg just in time to take on a new and prestigious job as its first assignment – the van was on duty at the recent (July 30-31) UK round of the FIA Formula E World Championship for electric racing cars, held at London’s ExCel centre. TriAgg was contracted to install the temporary surfaces, crash barriers and debris fencing for the race circuit, and the eVito was on call across the race meeting to deal with any emergency track repairs.

“It’s a crucial role but repairs are only required in the event of an accident or other problem, so the eVito’s services were not required. We thought it only right, though, to use an electric vehicle for such a high-profile showcase of battery power,” said Mr Dawe.

“Now, though, we’re looking forward to gaining a deeper understanding of how an electric van will fit into our day-to-day work patterns – and the signs are extremely promising. It’s shown it can cover 160 miles before needing a recharge and is very smooth, quiet and comfortable to drive. In all other practical aspects it’s just like any other Mercedes-Benz Vito, which from me is high praise indeed, but with zero tailpipe emissions. Engineer Michael Elgar, who drives the eVito, is highly impressed already.”

TriAgg provides a range of asphalt and resin surfacing and linemarking services, as well as related civil engineering and surveying, for a commercial and private clients across the country. Most of its work is in the South-East of England but teams have been despatched as far afield as Cornwall, Scotland and Wales. Increasingly, its contracts include laying and marking dedicated parking bays for electric vehicle charging points.

The battery-powered Mercedes-Benz eVito has sliding load doors on both sides as well as rear doors that provide access, in the case of TriAgg’s L2 variant, to up to 6.0m3 of cargo area. The 66 kWh battery is securely mounted in a protective housing beneath the floor, so does not impinge on the available space. The vehicle offers an average range on a single charge of up to 162 miles (WLTP combined), with rapid charging up to 80% power in as little as 35 minutes (subject to power available and factors including temperature and cable type used).