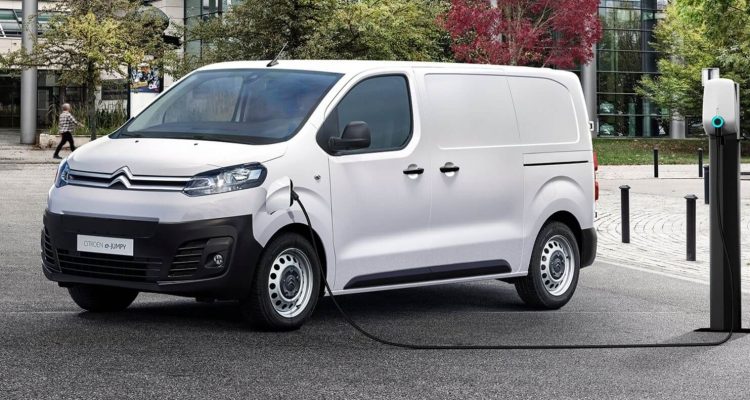 More than half of van owners say they are discouraged from switching to an electric van due to a lack of chargepoint infrastructure, according to new research published today by the Society of Motor Manufacturers and Traders (SMMT). An SMMT survey by Savanta ComRes found that 57% of people who own or lease a van in the UK are worried that they wouldn’t be able to find a public charging point when they need it.1 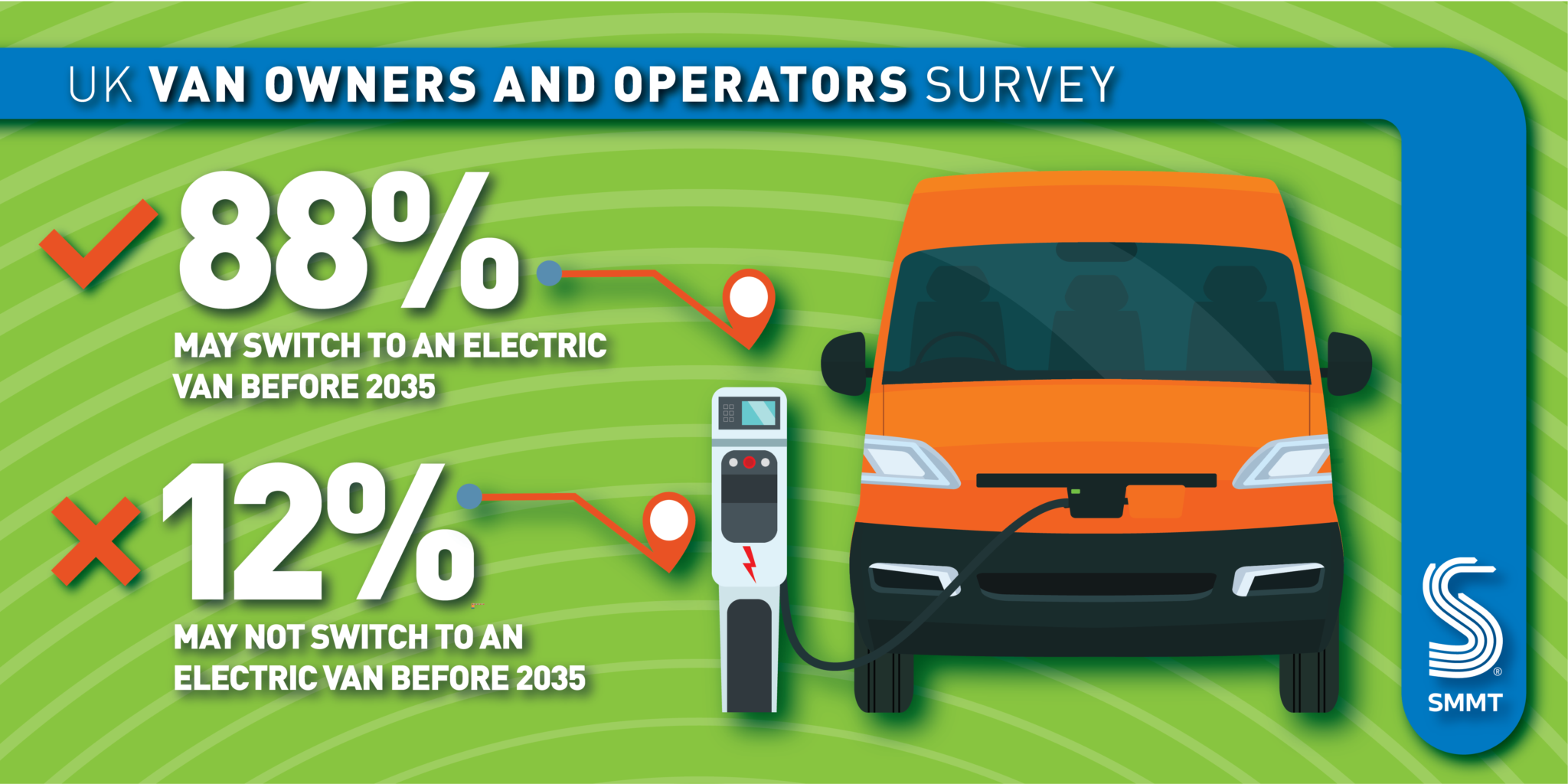 Persuading van drivers to switch to zero emission vehicles is essential if Britain is to become Net Zero while keeping the nation on the move. Vans directly support around one in 10 workers in Britain, acting as the essential workhorse for sectors such as construction and industry, trades such as plumbers, landscapers and cleaners, and home delivery services which grew rapidly during the pandemic.2 With more than four million vans on the road, electrifying the fleet will substantially reduce the UK’s transport-related carbon emissions, while also delivering cleaner air in cities. Those who switch can enjoy lower running costs, promote their environmental credentials and demonstrate sustainability when bidding for work.

More than a third of all new van models now on sale come with a plug following billions of pounds of investment by manufacturers, investment which has delivered massively improved payloads and battery range, with van owners spoilt for choice.3 Indeed, confidence in this range is high, with just 20% saying there isn’t enough variety of models to meet their needs. At the Commercial Vehicle Show, which opens today at the NEC in Birmingham, around 10,000 visitors will have the opportunity to discover the latest electric vans, alongside electric trucks, trailers and a vast variety of commercial vehicle technology. 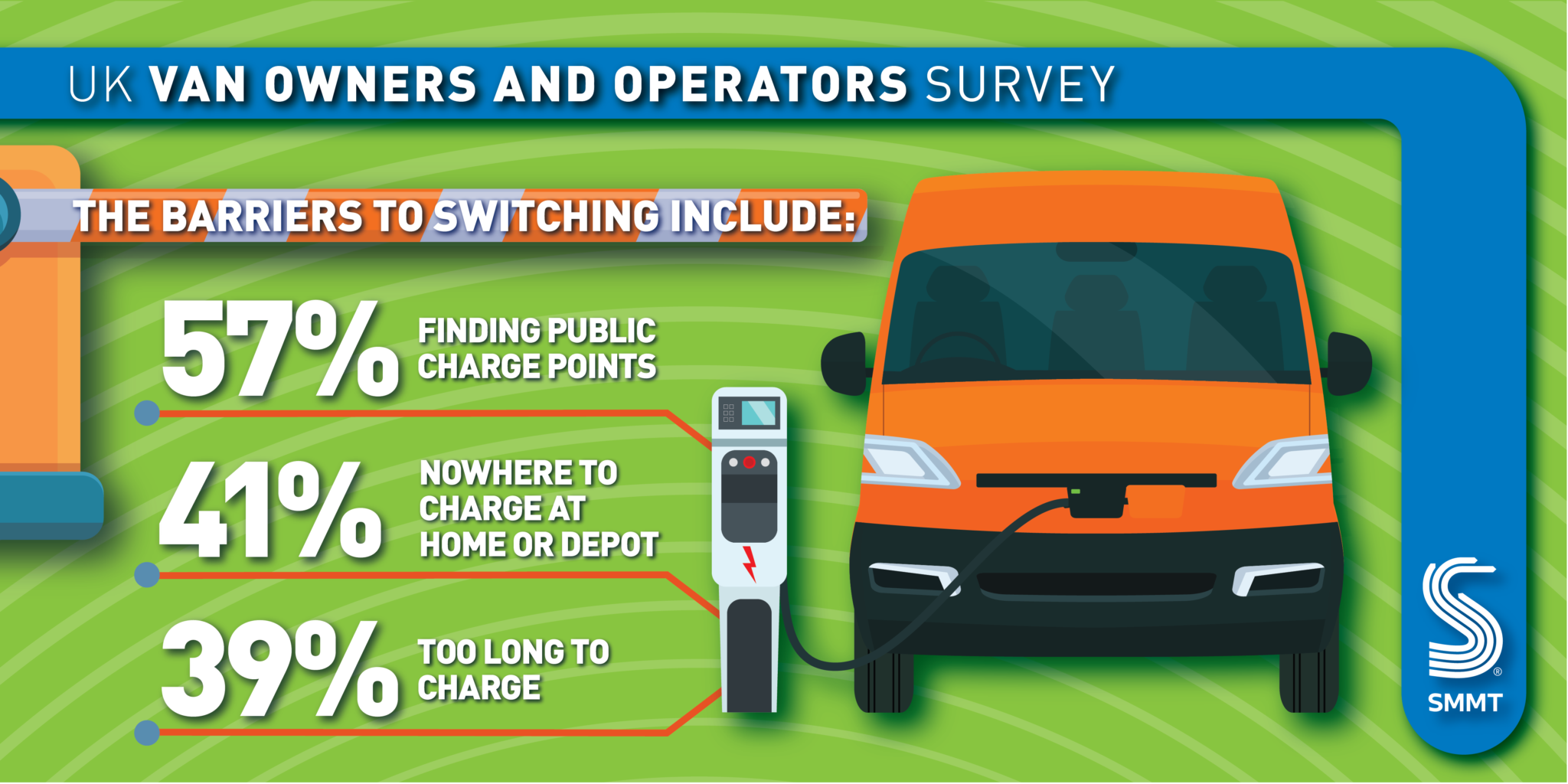 Despite electric van uptake doubling in the last year, these vehicles still account for just one in 20 new van registrations – meaning the market is currently about two years behind that of cars, where uptake of zero emission cars is closer to one in five.4 With vans facing the same 2035 end of sale date for non-zero emission vehicles as cars, however, the automotive sector is calling on all stakeholders to match its commitment to drive the electric transition.

While just one in eight owners say they don’t plan to ever switch to an electric van, the vast majority (88%) say they would go electric by 2035 but a fifth of these owners say they will defer the decision for three to seven years. Overcoming this reticence is critical, therefore, with many people (58%) suggesting they might be convinced to buy an EV sooner if there was a greater number of public charging points. The availability of government incentives such as reduced tax or grants towards purchase would also steer 57% of respondents towards a zero emission van.

The UK already has a paucity of standard public charge points as take up of electrified vehicles accelerates. There is just one available for every 32 plug-in vehicles on the road, with fears exacerbated for van owners.5 Public chargepoints designed for cars will not always be suitable or in the right locations for vans, which also typically need a larger parking area. As a result, van charging provision must be factored into national infrastructure plans, with commensurate and binding targets for charge points for passenger cars and commercial vehicles to match the commitments of the automotive industry.

While the survey reveals perceived battery capacity to be an influence on range anxiety, with 65% of respondents stating that longer battery range would encourage them to switch, these fears may be overstated, with an average range on a single charge of an electric van now around 150 miles. Just 6% of van owners say they exceeded this distance regularly, while four out of five averaged fewer than 100 miles in a single day. 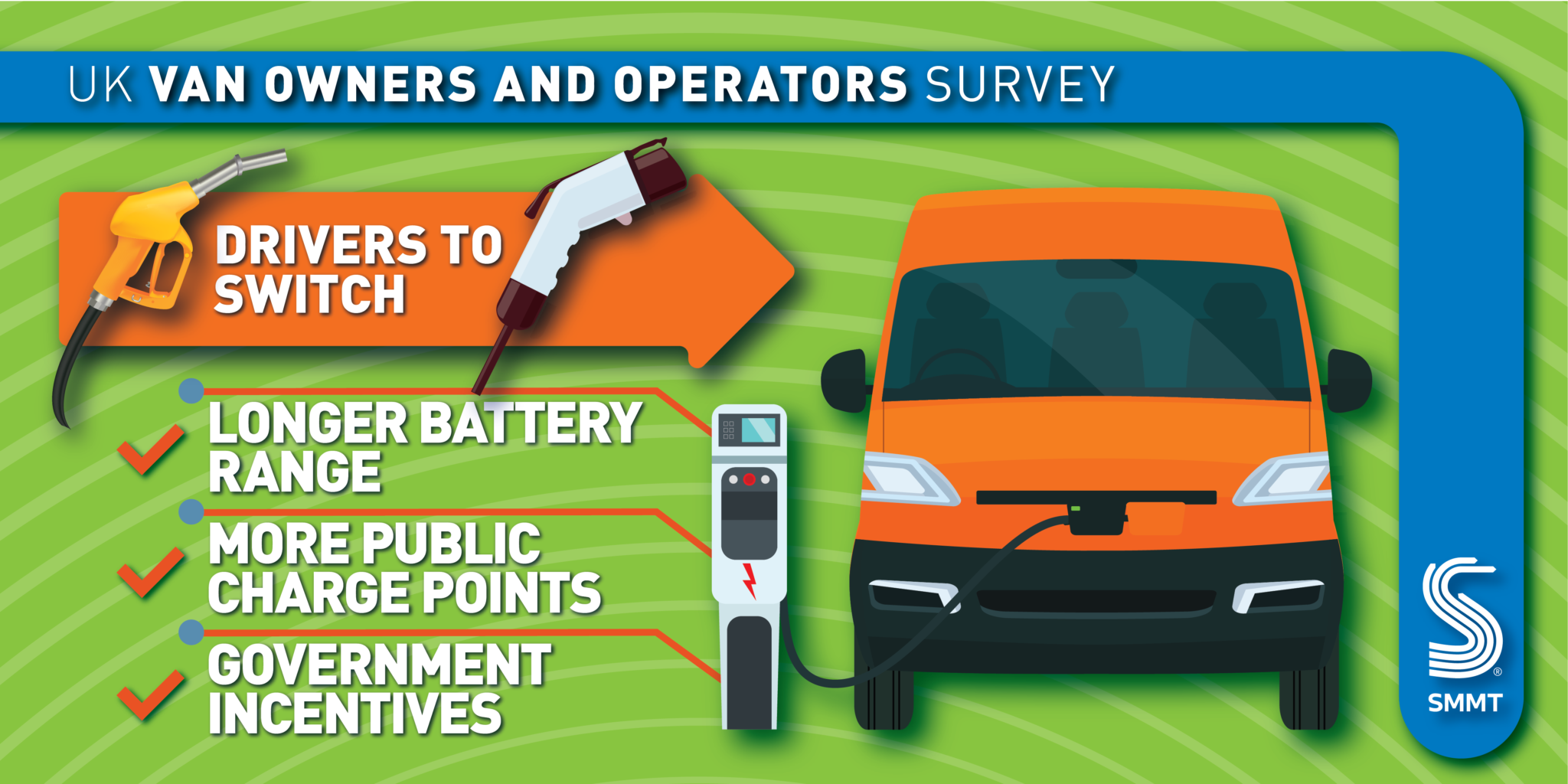 Electric van buyers currently benefit from the Plug-in Van Grant, worth up to £2,500 for small vans and £5,000 for larger ones, as well as up to £350 towards installing a chargepoint at their place of work. However, homeowners no longer receive a grant to install a home charging point, meaning van owners who operate from home will need to pay the full price, which can be up to £1,500. Given 41% of respondents said they had nowhere to charge a vehicle at home or their depot, supporting both private and public chargepoint provision will be essential to drive the switch.

Mike Hawes, SMMT Chief Executive, said, “Britain’s businesses run on vans and if we’re to deliver the nation’s carbon emission cuts, we need them to move to electric. There’s an electric van to suit every business case, but we need a ‘van plan’ to ensure zero-emission driving works for the millions of people for whom their van is their livelihood and the millions more who rely on these workhorses for the delivery of their daily needs. The automotive industry is getting these new technology vehicles into the showrooms – we need government and other stakeholders to match our commitments to get them out on the road.”

Tomas Edwards CMO of Daloop: “New research from the Society of Motor Manufacturers and Traders (SMMT) has shown that 57% of van owners are anxious about going electric, largely over fears that they won’t be able to find a charging point when they need it. Whilst the results don’t surprise us, it once again highlights the continuing anxiety and lack of understanding surrounding Electric Vehicle (EV) charging infrastructure.

“Lack of charging infrastructure is frequently discussed as a key reason for preventing businesses and individuals from investing in EVs and therefore a large part of the anxiety that is felt in relation to transition is linked to concerns about availability.  However, such worries stem from an expectation that the roadside on-demand supply of petrol and diesel needs to be replicated for EVs to be successful. It doesn’t.

“The right infrastructure is essential for the widespread transition to EVs. Drivers won’t need to ‘look’ for a charging station because for the vast majority of drivers, they will have charged sufficiently overnight to make their journeys and routes possible. For those where charging during the day is required, there will be sufficient infrastructure for them – as we know through the government’s commitment to building 300,000 EV charge points by 2030, the continuing progress of private operators, and the suspected increases in destination charging (workplaces, leisure, retail, and so forth) that will allow drivers to confidently find an EV charger if they need one.

“The research today reminds us of the pressing need to improve EV charger confidence and boost infrastructure awareness especially when a majority of those surveyed expressed that they might be convinced to buy an EV sooner if there were a greater number of public charging points.”

1 Savanta undertook a poll of 500 van owners. Fieldwork was conducted between 11-18 May 2022.
2 SMMT: Light Commercial Vehicles Delivering For The UK Economy
3 62 van models on the market, 22 available as battery electric
4 Jan-April 2022 registrations – plug-in vans: 5.6%; cars: 21.1%
5 Based on estimated vehicle park and standard public chargers available at end of 2021