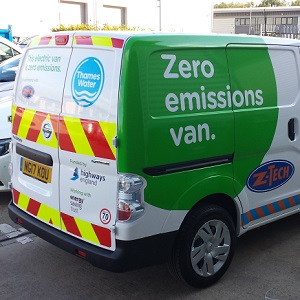 New analysis of research shows that pollution from older diesel vans has significant health damage costing £2.2 billion per annum to NHS and society, and this is a problem that is set to increase as vans are the fastest growing vehicle type in the UK. With 75 billion miles driven each year by vans, they contribute a staggering 30% of the UK’s road transport NOx emissions, costing three times more per vehicle to the UK’s health than cars.

16 of the UK’s largest fleet operators, are responding to this issue by signing the Clean Van Commitment and investing an initial £40 million over the next 2 years to drive the increase in use of electric vans.

Launching today, the DfT backed Clean Van Commitment, led by Global Action Plan in partnership with Engie has 16 businesses signed up including Engie, Tesco, Anglian Water, Leeds City Council, Network Rail and Yorkshire Ambulance Service representing some of the largest van fleets operators.  The announcement comes ahead of the UK hosting the world’s first Zero Emission Vehicle Summit next week, where nations from around the world will come together to agree to support the development of and acceleration in uptake of green vehicles.

The commitment to source 2,400 electric vans provides manufacturers with the closest they will ever get to a guaranteed level of demand they can supply, kick starting the transition to fully electrify the UK’s 4 million diesel van fleet. The first batch of  vehicles will deliver up to £55 million in lifetime savings from health costs in an area such as inner London. The Clean Van Commitment is a collective response from van operators that is creating a clean signal to Government, manufacturers and the National Grid that they are dedicated to immediately delivering zero tailpipe emissions.

The Commitment includes two targets.  The first target is an immediate commitment to switching a proportion of their fleet by 2020 of 2,400 vehicles and a longer term commitment to deliver zero tailpipe emissions by 2028 of more than 18,000 vans if sufficient charging infrastructure and competitively priced electric vans are available. This will not only help bring down the price of new electric vans it will stimulate the second hand EV market in 4-6 years which is especially helpful for the 2 million independent van owners who want to protect the communities they serve from air pollution.

These leaders have made this commitment at a vital time because the UK’s van challenge could get worse. Fleets taking this leadership could reverse a potentially growing trend:

Roads Minister, Jesse Norman MP, said: “The Government’s Road to Zero strategy outlines its intention to lead the world in the design and manufacturing of zero emission vehicles – delivering significant environmental, health and economic benefits. The Last Mile Call for Evidence, published in July, will allow us to explore new opportunities for replacing vans with electric cargo bikes, vans and micro vehicles.

“This latest research further highlights the very serious potential impacts of nitrous dioxide pollution, and underlines the importance of the transition to greener transport. That is why the Clean Van Commitment is important, encouraging some of the biggest van fleet operators in the UK to switch to cleaner vehicles.”

Bex Bolland, Head of Air Quality, Global Action Plan said:  “Today marks a significant moment for the UK’s van sector. For the first time, we know just how quickly van fleet leaders aim to adopt electric vehicles. Their collective purchasing commitments show manufacturers that demand is thriving, and will help energy sector, local authority and central government planning. These 16 fleets will  pave the way for the national fleet of 4 million vans to become zero emission, significantly improving the air we all breathe.”

Wilfrid Petrie, CEO, ENGIE UK & Ireland said:  “Air pollution is an issue that impacts upon everyone and we are proud to have partnered with GAP to develop the Clean Van Commitment. In January 2017 ENGIE committed to 20 % of its fleet to be EV by 2020 and zero diesel by 2025. With the rapid advances being made in electric vehicles and the range available ENGIE is meeting this challenge as a key provider of infrastructure and green mobility services.”

The Clean Van Commitment aims to target the largest van fleet operators in the UK.  UK businesses are sending a clear signal to Government, manufacturers and the National Grid that they are ready to go zero tailpipe emission.  The Commitment by these businesses clearly demonstrates their pledge to cleaning up air pollution, and to protect the communities within which they operate. To help more van fleets make the switch, the fleet operators recommend more charging points, tax changes that support electric vans, a greater choice of electric van models and permissions to add charging infrastructure to their depots.