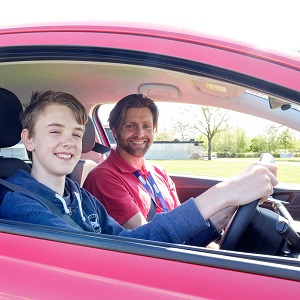 An event aimed at bringing road safety professionals together to help create safer new drivers has found in favour of pre-17 driving tuition at its key note debate.

Taking place at the Young Driver Focus 2018, held on 25th April at the Royal Automobile Club in London, the ‘Big Debate’ saw motoring journalist, author, TV presenter and campaigner Quentin Willson and Professor Frank McKenna, an expert in psychology who has worked with road safety organisations and the Parliamentary Advisory Council for Transport Safety (PACTS), going head to head. Each delivered presentations on their side of the argument for and against pre-17 driver training, before being questioned by the audience. A vote at the end showed 65 per cent of the road safety professionals in the room were in favour of pre-17 driving tuition, put forward by Quentin Willson.

Quentin Willson has been campaigning for better novice driver tuition for 20 years, and is a patron of the Young Driver organisation, which has delivered more than 500,000 pre-17 lessons since it launched in 2009. He believes that teaching children from as young as 10 creates a safer next generation of drivers, and he has presented evidence to Government Select Committees, lobbied the Department for Transport and Government ministers and had questions tabled in the House of Commons.

The presentation delivered by Quentin Willson looked at a comprehensive study undertaken in Sweden, which saw accident rates reduced by 40 per cent. It also considered the science of a teenager’s brain, preconceptions around early driver training and the success achieved by Young Driver, including watching pupils in action on the screen.

Now in its fifth year, Young Driver Focus 2018 was organised by Road Safety GB working in partnership with FirstCar, to look at the important topic of road safety for newly qualified drivers. It is aimed at both public sector road safety professionals and private sector organisations.

Young drivers are at much higher risk of having an accident when they pass their test – one in five will crash within six months and almost 450 people are killed every year on our roads in accidents involving young drivers.

The BVRLA has today published its 2020 Industry Outlook for Commercial Vehicles report, charting the main challenges faced by the sector and providing insight into how they

Paragon Software Systems has introduced a zoning tool in

The average price of a used car in December