Majority of drivers will avoid EU speed limiters, according to survey 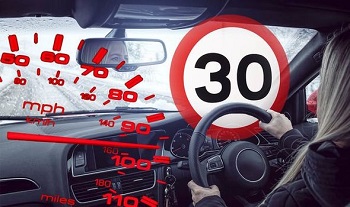 In March, the European Commission provisionally agreed a plan to make speed limiters mandatory for all vehicles sold in Europe from 2022. Regardless of withdrawal, the UK has announced that it will follow suit. However, a recent survey by CLM Fleet Management (part of the Maxxia Group), found that UK motorists are not so keen on the idea.

The survey, which asked almost 300 UK motorists about Intelligent Speed Assistance (ISA) systems, found that just under half thought the plan was a bad idea, while 54% would avoid purchasing a car with an automatic speed limiter entirely.

The responses suggest that opposition to ISAs is driven by concerns over the devices’ intrusive nature and their actual utility. 57% of respondents thought that the limiters were excessively controlling and fell under the umbrella of ‘big brother’ behaviour. Respondents also expressed scepticism that the devices would even be used, with 68% of them expecting drivers to turn them off for every journey, thereby rendering them useless.

For fleet managers facing the possibility of ISA installations in their vehicles, taking this sentiment into account will be a key factor in avoiding withdrawals from company car schemes and maintaining trust.

On a more positive note, it seems that general measures to make roads safer should expect a positive reception. Drivers surveyed highlighted that road safety was still front of mind, with 45% of respondents agreeing that ISA would have ‘a positive road safety benefit.’

John Lawrence, Managing Director at CLM Fleet Management: “ISA has some clear benefits, not only from a safety perspective, but also when it comes to licence preservation. The technology can pick up accurate speed limits, potentially reducing speeding fines and penalties. This could be good news for the ‘road warrior’ community who are completely reliant on having their licences intact to make a living.

“However, for fleet managers looking to implement the technology our findings suggest it could be a difficult path ahead. Forcing the technology on drivers could prompt a backlash and damage fleet engagement. If this technology is to be successful, firms should consider a period of driver communication and consultation. This will allow them to both understand concerns and promote the potential benefits of ISA.”