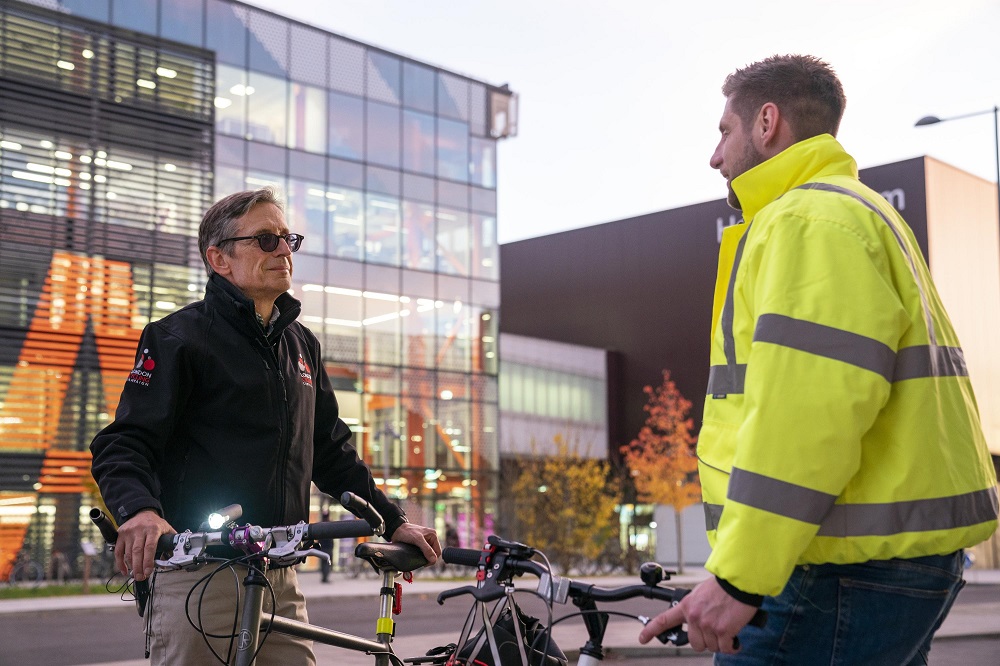 Ford’s Transport Operations team partnered with the London Cycling campaign to bring Ford’s ‘WheelSwap’ VR experience to life. ‘WheelSwap’, which is part of Ford’s ‘Share The Road’ campaign, allows motorists to experience a journey from a cyclist’s perspective, and vice versa.

The WheelSwap activity included Tom Bogdanowicz, Senior Policy and Development Officer, London Cycling Campaign (LCC), swapping perspectives with three drivers and driver trainers from the Ford Transport Operations team. In the LGV, the conversation between the two road users focused on the vision of the driver – and situations where a cyclist is and is not visible to the driver, keeping the appropriate two-metre distance when passing a cyclist and ensuring LGV drivers do not enter ‘bike boxes’.

“LCC is working with TfL and industry to help new lorry designs with fewer blind spots become the norm,” said Ashok Sinha. “But even then, it remains important that LGV drivers and cyclists take simple steps to put themselves in each other’s shoes and help avoid collisions. Programmes like ‘WheelSwap’ and ‘Safer Urban Driving’ help achieve this and we encourage more drivers and cyclists to take part in them.”

When cycling, the focus turned to road position, and understanding why cyclists may be riding centrally in the road to avoid potholes or ‘dooring’ from a parked vehicle, particularly on a narrow street. Road infrastructure was also discussed, with the suggestion that routes could be appraised to reduce the incidence of collisions.

“Having a change of perspectives was certainly insightful “said Andrew Main, driver trainer, Ford Transport Operations team and DVSA instructor. “A greater understanding of the reasons behind cyclists’ actions is very helpful for an LGV driver as we decide on how to approach certain situations.”

Ford, and its Transport Operations team will be taking these messages into local schools during Road Safety Week with the WheelSwap VR experience and a static LGV activity. After the ‘WheelSwap’ activity, the Ford Transport Operations team intend to trial the ‘Safer Urban Driving’ module – which includes a practical cycling element – as part of their Driver Certificate of Personal Competence (CPC). They will also use the ‘WheelSwap’ VR in future vulnerable road user training.

“Empathising with and understanding the actions of other road users is extremely important to increase road safety,” said John Oldham, European Ford Transport Operations Manager. “The WheelSwap activity certainly helps to achieve that and I think we’ve taken positive lessons away from it.”

Joshua Harris, director of campaigns at Brake, the road safety charity, said: “Every road death is a preventable tragedy and with LGVs disproportionately involved in cycling fatalities, we must understand why and address the cause. Safer lorry design and improved driver vision are vital developments which can be complemented by generating better understanding and awareness between road users. WheelSwap is a fantastic scheme which does just that, letting cyclists and lorry drivers experience each other’s perspective on the road. This Road Safety Week is all about being more #BikeSmart and ‘WheelSwap’ is a great programme which gets lorry drivers thinking about the safety of those on two wheels.”