Grit Expectations: Councils and Road Authorities Get Ready For Winter 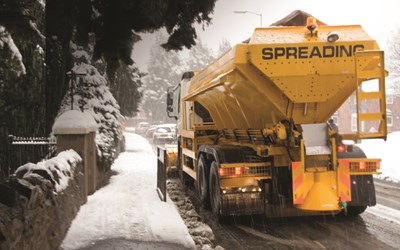 With icy weather set to hit the UK later this week and into next week, and temperatures forecast to be well below zero, Transport Network – publishers of Highways and Smart Highways magazines and a leading highways and transport event company – has reviewed the nation’s readiness for all that winter has to throw at it.

Dominic Browne, editor of Highway says: “Motorists will be pleased to hear the news that councils had 1.4 million tonnes of salt stockpiled in preparation for winter, with 94% of councils suggesting they have either more salt or the same level as last year. This means we should not see a return to the dark days of some eight years ago when highway authorities simply ran out of salt. Things have improved since then, with councils given specific resilience targets for their stockpiles. However issues still arise when individual areas suffer the brunt of the extreme weather.

“Last year, some councils ran out of salt stocks due simply to the logistics of getting fresh orders to depots on time. This was a combination of hold ups from suppliers, and a failure to prioritise those councils with the most urgent need.
“This year, the best advice on reorders, is the earlier they can the better, and to make sure they have back-up plans with alternative suppliers,” he adds.

“According to the Local Government Association (LGA) annual Winter Readiness Survey, more than half (55%) of councils will share salt stocks, 30% will share gritting machinery, and one in five (22%) plan to team up across their boundaries to send staff to key locations. While this collaborative working is a step in the right direction, drivers who have been stuck in their cars in freezing conditions will want to know why these numbers aren’t higher.

“Finally, last winter we saw some issues with crashes and pile-ups on steep inclines on roads, particularly in Scotland. Drivers will want to know that all roads authorities have identified those treacherous parts of their network, and have a plan and equipment such as heavy recovery vehicles in place should pile-ups occur.”

Look out this winter for new gritters being used by Highways England on motorways and major roads.  The bright orange vehicles use innovative technology, which includes being able to pre-programme them with information specific to each gritting route, spreading salt onto the road automatically, taking into account any specific requirements for bridges, landscape and other road features, and allowing the driver to focus on driving at all times.

However, technology in cars could play a stronger role in keeping roads moving. Paul Hutton, editor of Smart Highways says: “We’re only just beginning to understand how connected vehicles can help us manage bad weather better.  For example every car has a thermometer which, when connected, can be programmed to anonymously alert road authorities of locations where temperatures drop below a certain level.  Similarly, when the vehicle’s windscreen wipers are on high, or when a car skids, that information can be used to warn traffic control rooms and other drivers.  Motoring organisations are connected to some of their members’ vehicles to alert them to weather-related problems such as a struggling battery, in order to reduce the number of emergency breakdowns – but the number is still relatively small.

“Over time, these technological innovations will become commonplace, just as air conditioning, central locking or electrically operated windows are no longer restricted to premium cars. In the meantime, it pays off for motorists to carry warm spare clothes and boots in case of emergencies. And better still, to make sure their car is fully maintained to help head off emergencies in the first place.”