A report out today from The Road Safety Foundation and Ageas Insurance calls for two clear actions where the government can take an immediate lead to reduce the number of fatal and serious crashes and deliver high returns to society.

“How Safe Are You on Britain’s Main Road Networks?” says Government must set disciplined safety goals for the proposed Major Road Network (MRN) in line with those in place for the strategic road network; and it must release new investment through the successful Safer Road Fund to address 75 persistently higher risk roads.

Analysis of the measurements and targets in place among the authorities that manage the roads covered by the Foundation’s report shows a patchwork approach to tackling death and serious injury. Just one authority – Highways England – has a specific commitment relating to the measurable safety performance of its road infrastructure. 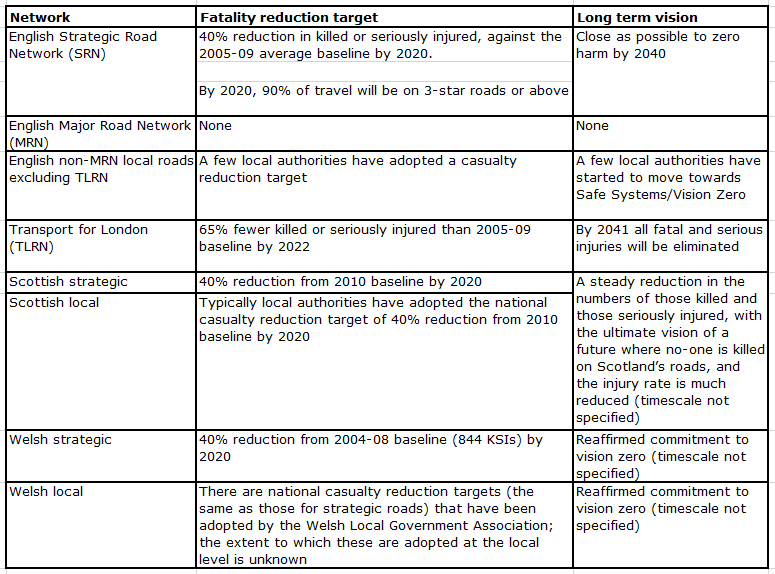 There is some evidence to suggest that countries achieve better casualty reduction when they adopt formal targets to coordinate action. Highways England is the only authority to target both the number of deaths and serious injuries and the star rating of its network.

The report recognises the significant improvement in Scotland (7% reduction in deaths and serious injuries). Scotland has national casualty reduction targets adopted by the Scottish Government in partnership with all stakeholders. In 2017, Scotland’s performance on its main roads helped its national fatality rate per million population to fall to 27 and so, for the first time, below that of England (28).  The per capita rate for Wales was 33.

The Road Safety Foundation predicts an even higher benefit cost ratio than the first Safer Roads Fund sections, paying back to society their costs more than 5 times over.

How Safe Are You on Britain’s Main Road Networks? also identifies a clear opportunity to tackle all of Britain’s unacceptably higher risk local roads through annual funding. It calls for an £83 million annual investment over the next five years to prevent 6,850 fatal and serious injuries over the next 20 years. This would require annual investment of £62m in England, £14m in Scotland and £7m in Wales.

England’s Strategic Road Network (SRN) is the most intensely used of all Britain’s main road networks. It is only 4,300 miles long but carries a third of the nation’s road travel.

The report shows that even though this network is by far the safest, more than 200 people lost their lives on it during 2017 alone.  Highways England’s systematic approach towards a goal of preventing all death and injury by 2040 needs considerable action to be achieved.

The government has committed to create and invest in a Major Roads Network to complement the SRN.  This will comprise the most important local ‘A’ roads and continue to be managed by local authorities.

In England, crash risk more than four times higher on the MRN than the SRN, and is nearly twice as high again on local authority non-MRN roads.  Only 10% of travel on the MRN is on low risk sections, and 18% of travel is on medium or higher risk sections (compared to just 1% of travel on strategic roads). The network carries a third of the travel on the strategic road network and, despite being only slightly longer, there were more fatal crashes on it in 2017. The report calls for these roads to be tackled as a priority to ensure that they are as safe as should be expected of major roads, and the introduction of formal safety performance management to the MRN. 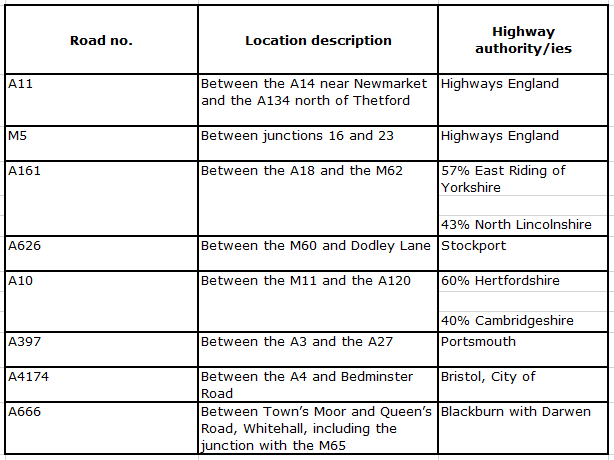 This year’s most improved road stretch is part of the A11 between the A14 near Newmarket and the A134 north of Thetford and managed by Highways England. The road was part converted to dual carriageway in 2015/16 and a bypass was created around the village of Elveden. Fatal and serious crashes fell from 31 in the first data period (2012-14) to 9 in the second data period (2015-17). 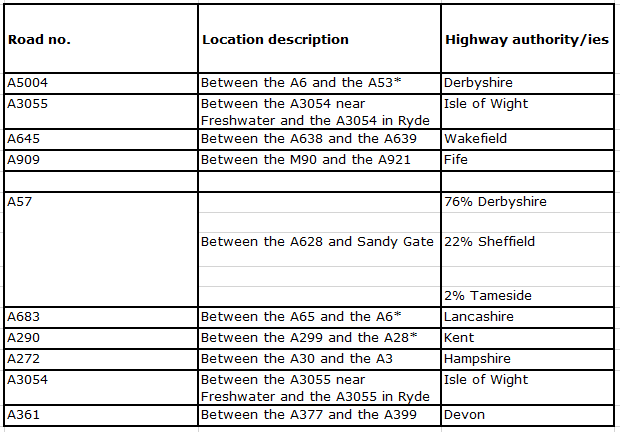 There are 75 persistently higher risk road sections that are not yet being addressed through the Safer Roads Fund, including seven of those listed in the top 10 persistently higher risk rural roads table (attached). A total of 4,400 fatal and serious crashes occurred on these roads between 2012 and 2017, and the associated societal cost of reported injury crashes between 2015 and 2017 was £1,008 million.

The A5004 between the A6 and the A53 in Derbyshire tops the list with 8 crashes resulting in death or serious injury in three years on just a 12km stretch of road.

For the first time, this year’s report takes a challenging initial step to analyse the safety of urban main roads. It finds that, while crash risk is similar for each country in Great Britain for both motorways and rural ‘A’ roads, risk is much higher on English urban ‘A’ roads than for Scottish and Welsh counterparts. Unsurprisingly, the largest single cause of death on urban roads was crashes involving vulnerable road users – pedestrians, cyclists and motorcyclists. On rural roads, this was head-on crashes and on motorways the largest single cause was run-off road crashes.

The report acknowledges the complexity of urban road layouts and that it is difficult to capture levels of pedestrian and cyclist flow, and so recognises that more work must be done in this area to properly benchmark and compare urban network performance.

Kate Fuller, Acting Executive Director of the Road Safety Foundation said: “Our main road networks need to be safe.  So much of our travel is on these intensely used networks that any flaw in their in-built safety means tragedy sooner rather than later.

“Years of work in Scotland, coupled with widely adopted formal casualty reduction targets is delivering results, and Scotland’s main road network is now safer than England’s and significantly safer than that of Wales.

Andy Watson CEO of Ageas Insurance said: “Authorities across Britain are making changes to their road networks as a direct consequence of the charity’s analysis and work in partnership with Ageas. We’re pleased to see that Highways England has inspected its entire network to measure its in-built safety and develop major investment plans. And likewise that some 30 local authorities are implementing improvements to 50 higher risk ‘A’ roads.