Evidence points towards Britain being in a period when the number of road fatalities is ‘broadly stable’ but not falling, the Government has conceded. 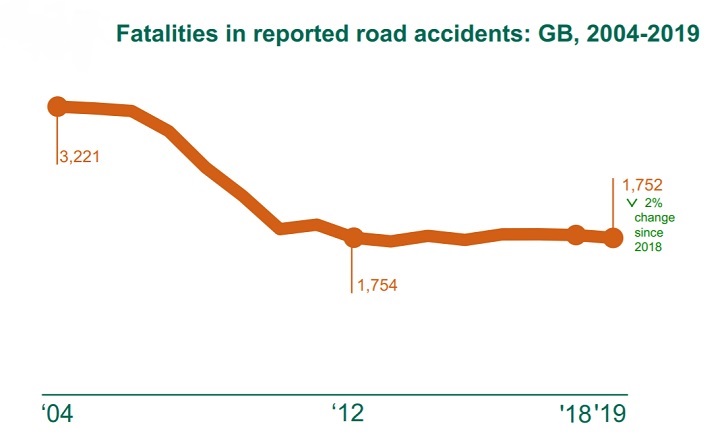 However, the Government admits this small decrease may be due to natural variation – adding that the trend in the number of fatalities has been broadly flat since 2010.

Meanwhile, there were 25,945 seriously injured casualties. However, this figure is not comparable to earlier years due to changes in severity reporting.

From 2016 onwards, figures on the severity of injury have been affected by a large number of police forces changing their reporting systems.

Fatalities by road user type and age
In terms of absolute counts, car occupants (including drivers and passengers) come out as the road user group with the greatest number of fatalities in 2019 (736) – followed by pedestrians (470), motorcyclists (336) and cyclists (100).

Conversely, there was a rise in the number of cyclists (1%) and pedestrians (3%) killed.

In terms of fatality rate per billion passenger miles, motorcycles were the most vulnerable (104.6), followed by pedestrians (35.4) and cyclists (29.0).

By way of comparison, the figure for car occupants was 1.6.