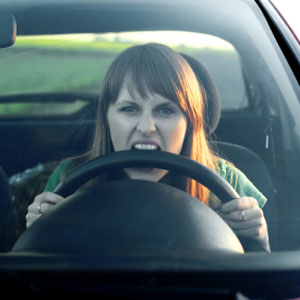 More than a third (38%) of British motorists resort to shouting obscenities if something angers them while driving, according to the findings of a new study* from automotive data experts, HPI.

And it’s Glaswegians who are the most potty-mouthed of all motorists with over half (53%) of drivers turning the air blue in reaction to what’s happening on the roads. Drivers in Bristol (44%) and Birmingham (43%) are next in the bad language league, resorting to swearing to vent their anger behind the wheel.

Norwich and Leeds (42%), Manchester (41%), Edinburgh (36%) and Liverpool and Nottingham (35%) are the next worst offending cities for driving-related expletives.

Cardiff drivers are the coolest with less than one in 10 (9%) resorting to profanity.

A fifth (20%) of drivers confessed to swearing in front of their children while in a fit of road rage with women (23%) more likely to do so than men (16%).

As well as swearing, the research also reveals drivers are compelled to react in other ways when the actions of other motorists anger them including muttering to themselves (36%), gesturing (21%), shouting (20%) and getting upset (12%). A further 5% find thumping the dashboard helps relieve the tension while 4% put their foot down and drive faster and 9% find they slow down.

One in ten says that road rage incidents affect their confidence and it makes them feel nervous about driving. 6% of motorists say they pull over to try to calm down with a further 3% getting out of their cars.

Fernando Garcia, consumer director at HPI, commented: “It’s important not to over-react when behind the wheel of a vehicle. Many drivers resort to swearing, shouting or gesturing at others on the road but all this does is lead to greater anger and frustration.

“It’s best to remain calm and to concentrate on what is happening on the road rather than getting one over on another motorist or road user who has done something to cause a reaction. It can take a great amount of self-control to do this, but safety behind the wheel is of paramount importance.”

*Independent research conducted in February 2019 amongst a nationally representative sample of 1,002 adult drivers aged between 18-65.