The UK new car market rose by 1.2% in August, according to the latest figures from the Society of Motor Manufacturers and Traders (SMMT). The growth, albeit marginal, is the first seen since February, with some 68,858 new vehicles joining the road during what is typically the second quietest month of the year as many buyers choose to wait for a ‘new’ numberplate in September.

Despite the growth, August volumes were still the weakest for the month, bar 2021, since 2013 as supply chain pressures continued to constrain the market.1 Large fleet registrations fell by -1.6%, although this was offset by a 3.2% increase in deliveries to private consumers. Business customers saw the largest increase of 26.6%, but the sector is small in volume and subject to volatility. 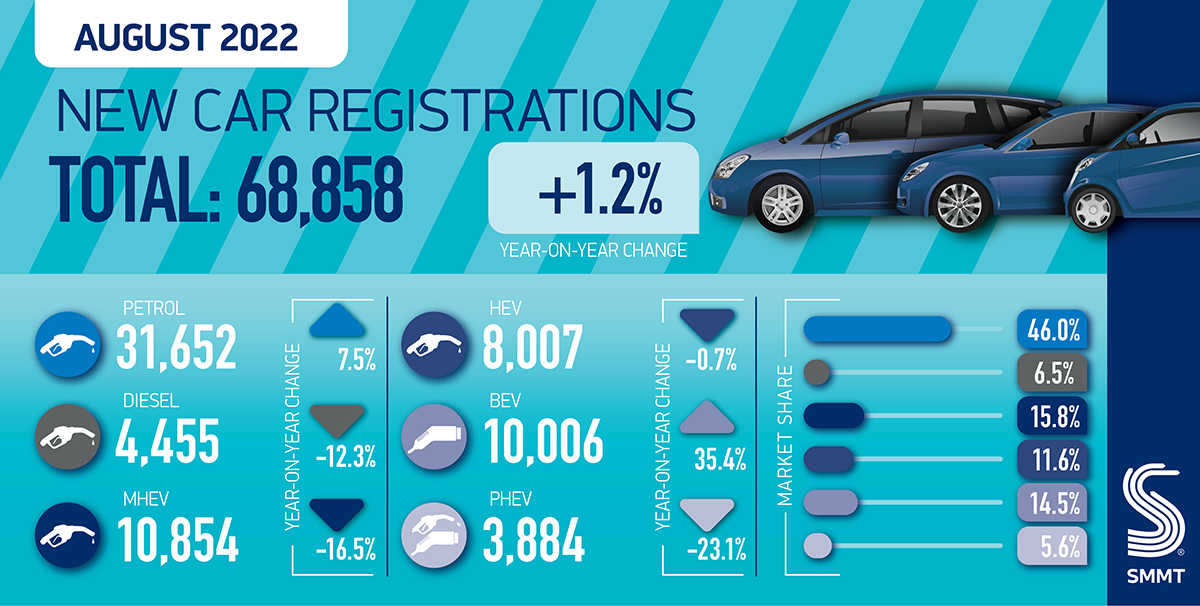 Overall growth in the month was driven primarily by battery electric vehicles (BEVs), which recorded a 35.4% increase in volumes and a 14.5% market share. However, growth in this segment is slowing, with a year-to-date increase of 48.8%, whereas at the end of Q1, BEV registrations had been up by 101.9%.

Superminis remained the most popular vehicle class, growing market share to 34.0% as 7.4% more of them were delivered to customers than in August 2021. Multi-purpose, luxury saloon and lower medium vehicles also recorded growth of 31.0%, 1.5% and 1.3% respectively, while registrations of all other segments declined.

Mike Hawes, SMMT Chief Executive, said, “August’s new car market growth is welcome, but marginal during a low volume month. Spiralling energy costs and inflation on top of sustained supply chain challenges are piling even more pressure on the automotive industry’s post-pandemic recovery, and we urgently need the new Prime Minister to tackle these challenges and restore confidence and sustainable growth. With September traditionally a bumper time for new car uptake, the next month will be the true barometer of industry recovery as it accelerates the transition to zero emission mobility despite the myriad challenges.”

Jon Lawes, Managing Director, Novuna Vehicle Solutions: “These figures illustrate the continued supply-side restraints on the market, which is translating into modest sales growth. However, demand for electric vehicles remains relatively robust, despite enduring protracted lead times which we expect to see continue well into 2023.

“Despite the new Conservative leader’s daunting in-tray, it is crucial we see firm, swift action to support the automotive sector across the board including further significant public charging infrastructure investment and incentives for drivers to ramp up the transition to zero emission mobility by 2030. We would urge the incoming leadership to maintain favourable tax incentives that have been successful in boosting EV uptake to date, such as salary sacrifice, whilst devoting significant resource to improving the charging infrastructure, which remains a barrier for millions of motorists looking to transition to an EV with confidence.”

Jamie Hamilton, automotive partner and head of electric vehicles at Deloitte, said: “New car registrations grew by 1.2% in August compared to the same period last year. While it is promising to see growth for the first time since February, this growth is coming from a low base. With just 68,858 cars sold last month, figures for the year to date remain well below pre-pandemic figures.

“The sector will be hoping that the new ‘72’ plate will contribute to an uptick in fortunes next month. But, with year-to-date sales down by -10.7% compared to last year, it would take an exceptional month to help the industry recover any shortfall from the rest of the year. Any expectations about September’s performance need to be tempered given the supply constraints that are still ongoing.

Dealers shielded from the cost of living crisis… for now

“The growing squeeze on the cost of living has seen consumer confidence plummet to an all-time low. Across the board, consumers are tightening their belts, with many delaying major purchases. However, pent-up demand that grew during the ongoing semi-conductor shortage means that order books are filled until the end of the year. As a result, many dealers will be insulated from falling demand in the short-term. Any fallout from the cost of living crisis is more likely to be felt next year, with some concerns already being raised about a slowdown in demand in 2023.

Challenges for dealers and OEMs

“Like the rest of the country, car dealers and manufacturers are feeling the effects of rising costs, particularly energy bills, as one of the additional challenges they are facing.

“Despite ongoing struggles experienced across the sector, battery electric vehicles continue to grow in popularity; volumes were up 35.4% in August compared to the same period last year, accounting for a 14.5% market share.

“This can be explained, in part, by some manufacturers prioritising the production of battery electric vehicles as semiconductor supplies remain constrained.

“Over the last few months, record fuel prices have encouraged some consumers to consider the switch to fully electric. With fuel prices starting to fall and the cost of electricity rising, some consumers may begin to second guess the financial benefits of switching to an EV. However, should the cost of charging an EV at home nearly double – as expected in October due to the rising energy price cap – EV drivers will still experience substantial savings compared to those filling up a petrol or diesel car.”

“The ascendency of EV registrations has been a bright light in a relatively gloomy picture for new car registrations this year. Yet, significant challenges lie ahead as we head into the autumn. EV drivers face a substantial uplift in charging costs due to the energy price cap increase and further clarity is needed on company car tax tables beyond 2025 to give fleet managers the insights they need to make long-term purchasing decisions.

“As the new Prime Minister prepares to make their way through an already busy in-tray, it’s vital that policymakers continue to support the transition to an electric future and give drivers and businesses the confidence to make the switch to a zero-emission vehicle. The government’s new £20million chargepoint scheme is another step in the right direction and all eyes will be on further support and funding to be announced before the year is out.”

“Despite ongoing material and vehicle supply issues, electric vehicle adoption levels continue to show no signs of slowing down as many more drivers realise the potential of making the switch to electric.

“While the continued growth is encouraging, we must ensure that the UK’s charging network is ready for drivers to access reliable, convenient and easy to operate charge points. Significant inroads have already been made to install charge points at work and leisure destinations, but the roll out of chargers closer to driver’s homes will unlock the potential for many more EVs being adopted.”

“Whilst August is typically a quiet month for franchised dealers, approaching the all-important plate change month acting as a catalyst to drive registration figures, the market has instead grown,” said Sue Robinson, Chief Executive of the National Franchised Dealers Association (NFDA) which represents franchised car and commercial vehicle dealers in the UK, commenting on the latest SMMT’s new passenger car registration figures.

Today’s figures showed August new car registration figures were up 1.2% compared to this time last year, at a total of 68,858.

Encouraging signs came from the electric vehicle market: 10,006 battery electric vehicles (BEVs) were registered in August, an impressive 35.4% increase from this point last year. There have now been 137,498 BEVs registered to the road in 2022. Plug-in hybrid vehicles (PHEVs) and Hybrid electric vehicle (HEVs) registrations decreased, by -23.1% and -0.7% respectively.

Sue Robinson added: “Potentially inflation and rising energy costs could continue to impact consumer buying trends; This, coupled with on-going global supply constraints and semi-conductor shortages, has meant another month of low registration volumes, although moderate growth has been recorded.

“The increase in petrol and diesel prices which we have experienced the past few months has resulted in sustained growth for EV sales, as people turn to greener, cheaper alternative modes of transport. Consumers are encouraged to visit an Electric Vehicle Approved (EVA) dealer as they are best equipped to address this demand and provide a wide range of choice, price point, and knowledge for customers.” 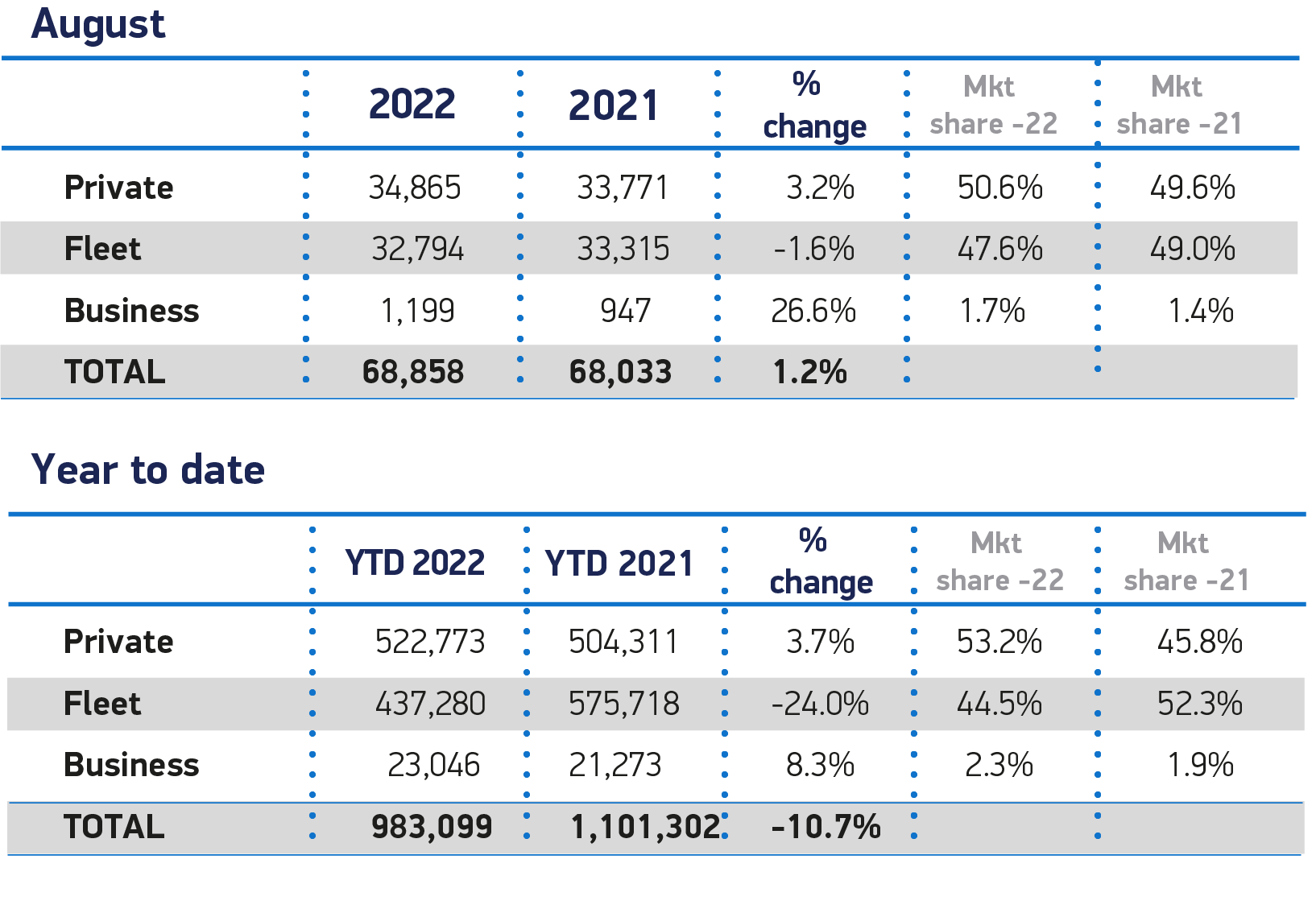 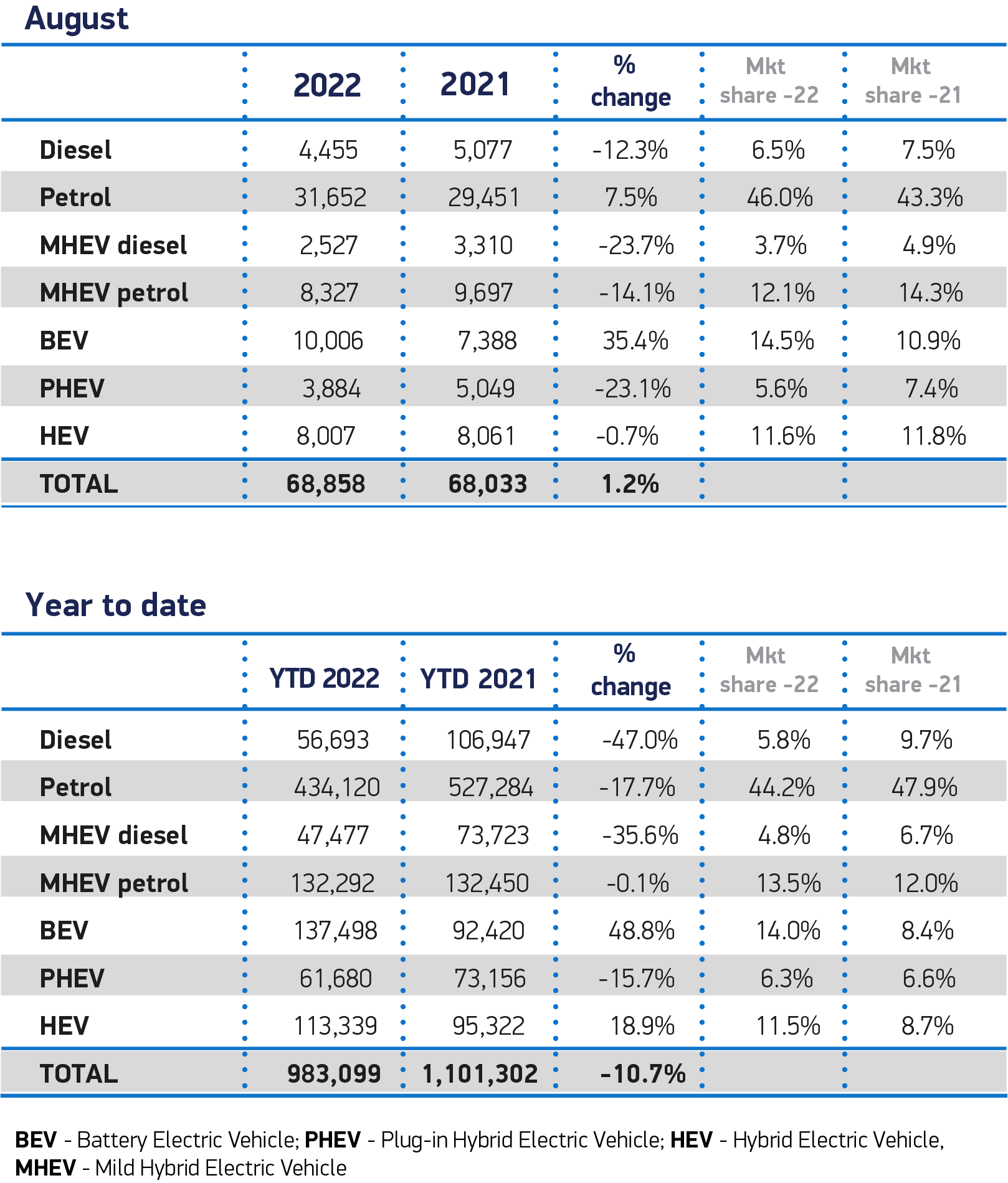 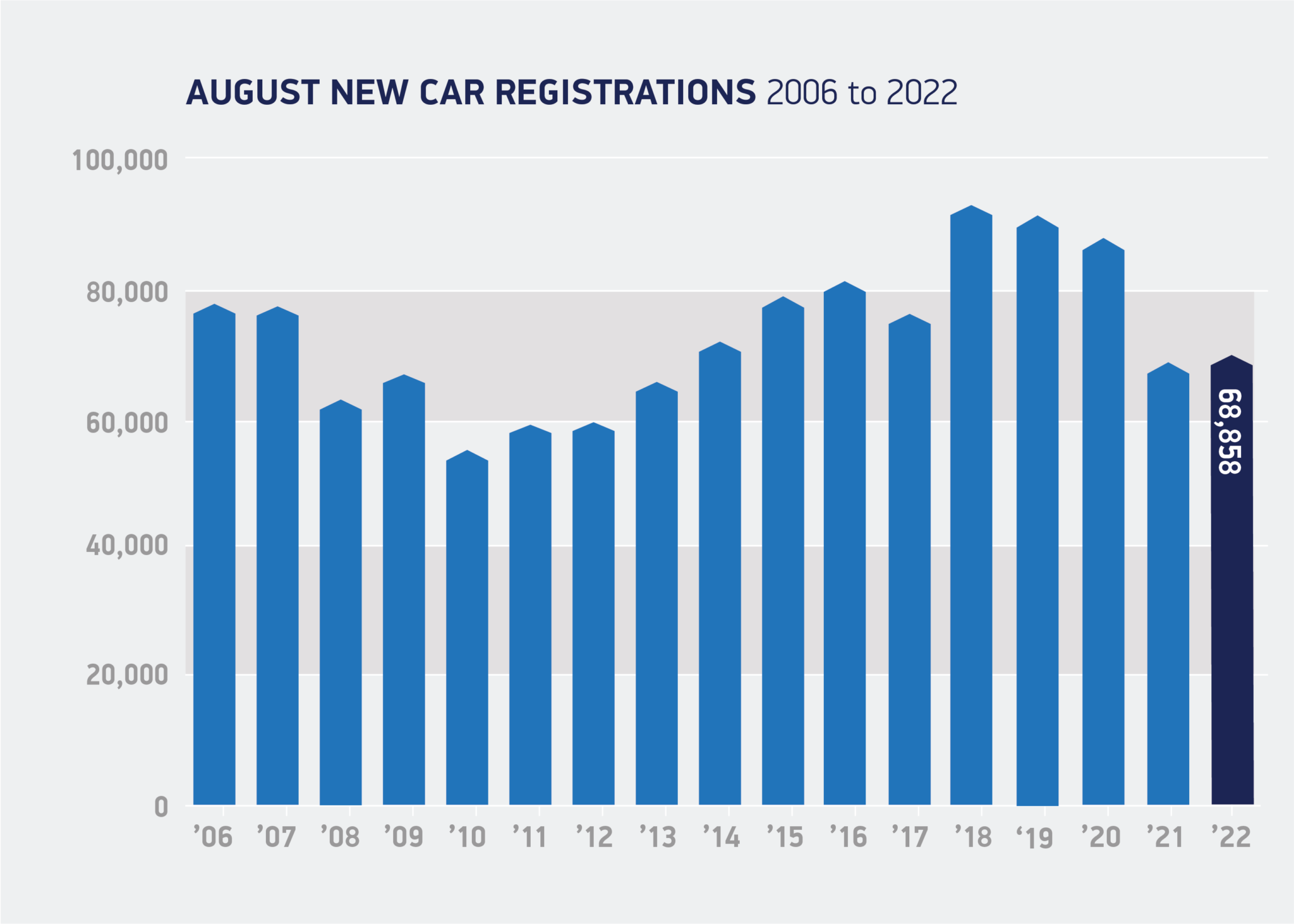