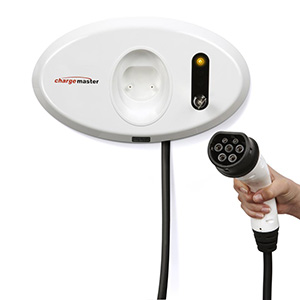 Chargemaster has announced that it will continue to offer its popular Homecharge i 3kW charging point installed free of charge.

The offer takes advantage of the new £9m government scheme (the Electric Vehicle Homecharge Scheme or EVHS), details of which were announced this week.
The government scheme requires recipients to own a plug-in vehicle and runs until 31st March 2015, or until the total allocated funding has been spent.
In addition to the Homecharge Unit, Chargemaster will also offer free POLAR membership for six months with any installation and customers will also receive free online access to usage data.

The ‘Polar Network’ gives electric vehicle users access to thousands of charging points across the country, all of which can be accessed with a single card.

David Martell, founder and Chief Executive at Chargemaster, said: “We are delighted to offer a free unit under the new scheme with support from the government.
“The ability for electric car drivers to have easy access to charging at home and across the UK is key to the reduction of carbon emissions nationally, as well as improving air quality, particularly in urban areas, so we are delighted to be doing our bit.”