BRABUS ADVENTURE: The exclusive off-road package for the Mercedes G-Class

BRABUS ADVENTURE: This is the label under which the world’s largest independent automotive refinement specialist presents an exclusive off-road package for all models of the current G-Class. 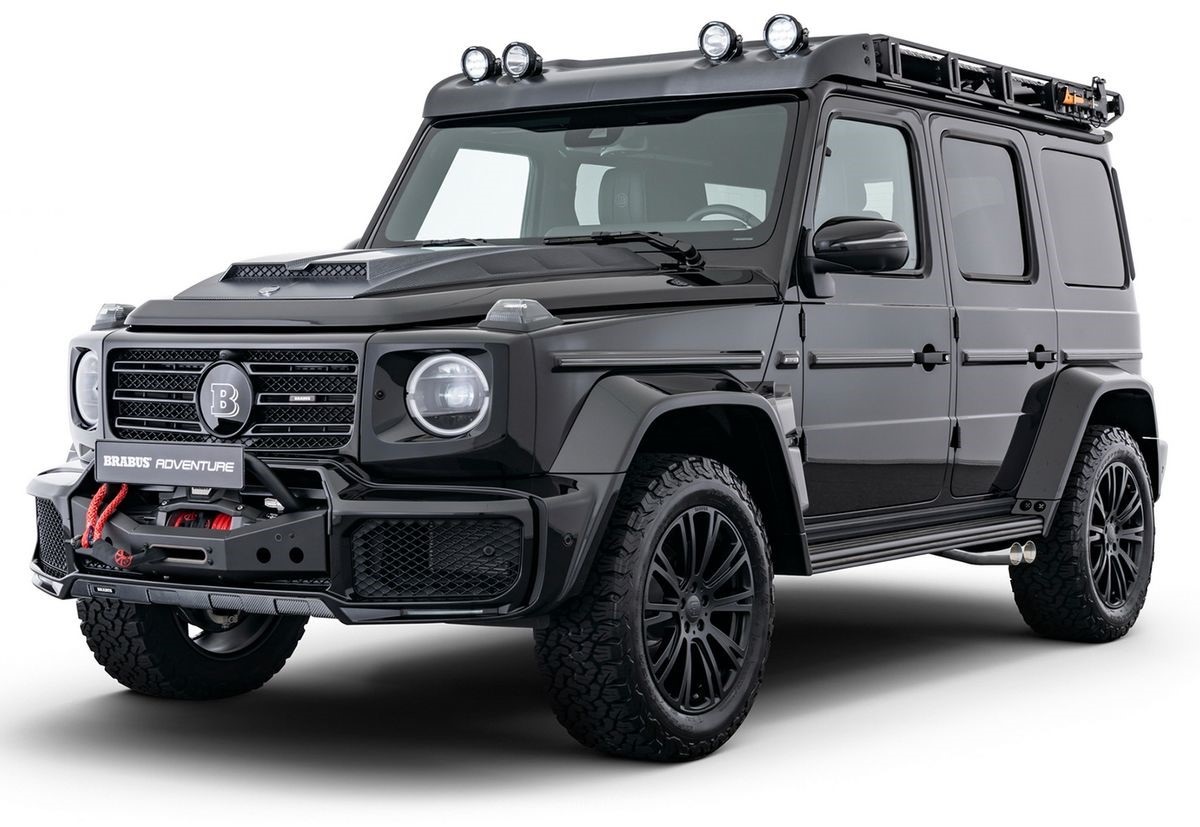 In order to optimize the off-road capabilities further, the fender flares of the BRABUS WIDESTAR widebody tower over 20-inch Monoblock R wheels with maximum-traction off-road tires of size 285/55 R 20. The pivoted spare wheel carrier with carbon cover holds a fifth wheel of the same specification for emergencies.

The BRABUS ADVENTURE suspension was developed to increase the ground clearance further. Other options that make the G-Model also fit for expeditions are the winch at the front and the wind deflector above the windshield, which with its four LED auxiliary headlamps improves illumination of the terrain in the dark. Further useful features are a large, robust luggage rack that spans the entire roof and a ladder at the rear that facilitates loading and unloading.
For the owners of the new G-Class, who opted for the turbodiesel version G 350 d, BRABUS (Brabus-Allee, D-46240 Bottrop, phone +49 / (0) 2041 / 777-0, fax +49 / (0) 2041 / 777 111, internet www.brabus.com) developed a new performance upgrade to an output of 243 kW / 330 hp (326 bhp) and 660 Nm (487 lb-ft) of torque.

The interior can be refined with exclusive BRABUS fine leather Mastik leather/Alcantara appointments in any conceivable color and a wide variety of designs.

In addition to spectacular looks, the BRABUS ADVENTURE accessories package for the current Mercedes G-Class also focuses on further enhancing the off-road capabilities. To give the off-roader with its extreme ground clearance even more dramatic looks while making it even more fit for tough daily use far off paved roads, the BRABUS engineers and designers developed an extensive range of BRABUS ADVENTURE equipment.

The combination of WIDESTAR fascia with large air intakes, brush guard and winch immediately catches the eye at the front. The robust skid plate is made from carbon and like all the other naked-carbon components on the vehicle sealed with a matte coating. The BRABUS hood attachment, which gives the G-Class an even beefier appearance from the front, is also produced from this carbon-fiber compound.

This also includes the BRABUS wind deflector above the windshield, which with its four round high-performance auxiliary headlamps provides excellent illumination of the terrain in front of the off-roader in the dark. Furthermore, this equally elegant and functional accessory also deflects the wind over the luggage rack that spans the entire roof. To facilitate loading and unloading of the massive rack fitted with brackets to hold an axe and spade at the sides, a ladder at the rear is also part of the BRABUS ADVENTURE product range.

Under the WIDESTAR fender flares at the front and rear axle, which add ten centimeters (4 in) to the width of the G-Class, the BRABUS ADVENTURE version is fitted with tailor-made BRABUS Monoblock R alloys of size 9.5Jx20. To match the off-road look, they are of course mounted with off-road tires of size 285/55 R 20 that feature massive tread lugs. The wheels with ten dimensionally offset pairs of double-spokes were painted semi-gloss black for the car on the photos.

Running boards painted that same color facilitate getting in and out of the car, a process that is made as safe as possible in the dark by the LED lights integrated into the flares. They are activated as soon as a door handle is pulled or the central locking system is activated via Keyless Go by approaching the vehicle. The BRABUS logos in the fender attachments behind the front flares light up at the same time.

At the rear, the BRABUS ADVENTURE conversion includes a WIDESTAR fascia with stylized skid plate. The spectacular off-road look also comprises a fifth Monoblock R wheel with an off-road tire. It is mounted at the rear of the vehicle on a pivoted spare wheel carrier. The naked-carbon cover of the spare documents the origin of this thrilling off-roader with its recessed BRABUS logotype.

The off-road capabilities of a vehicle depend not only on the powertrain and tires, but also and especially on the ground clearance when the terrain gets rougher. That is why the BRABUS suspension engineers developed special height-adjustable BRABUS ADVENTURE sport springs for the electronically controlled, height-adjustable G-Class suspension. They allow raising the G-Model by up to another 40 millimeters (1.6 in), which further increases the ground clearance and thus the qualities in rough terrain.

That is also where the added torque comes in handy. It is why many G-Class owners opt for the turbodiesel version G 350 d. Engine tuning ‘made by BRABUS’ has been synonymous with tremendous performance in conjunction with flawless daily practicality and durability for more than 40 years. BRABUS vouches for this, as for all components and work, with the three-year or 100,000-kilometer / 60,000-mile BRABUS Tuning Warranty® (see BRABUS Tuning Warranty Terms and Conditions, updated July 2013). BRABUS exclusively uses hi-tech lubricants from technology partner Motul for this engine as well.

The power unit engineers developed the BRABUS ECO PowerXtra D35 module for the three-liter, straight-six turbodiesel engine with common-rail direct injection. The plug-and-play auxiliary control unit is adapted to the CAN bus of the G-Class.

The driving performance also is accordingly impressive for a diesel-powered off-roader weighing about 2.5 metric tons: From rest, it reaches a speed of 100 km/h (62 mph) in just 7.2 seconds. The top speed increases to 202 km/h (126 mph).

An all-stainless BRABUS sport exhaust system is of course also available for the G 350 d turbodiesel version. It features the unmistakable distinctive mark of BRABUS, two chrome tailpipes in the unusual side-pipe design on each side of the vehicle.

The BRABUS upholstery shop enhanced the standard leather appointments specifically for the car on these photos. To this end, the center sections of the seats and door panels were given an arrowhead pattern quilting applied with pinpoint precision. To create an attractive contrast to the black leather, white piping and decorative seams were incorporated in various places.

The Bottrop-based refinement specialist also offers particularly exclusive BRABUS fine leather interiors in practically any conceivable color and a wide variety of upholstery designs for owners of the current Mercedes G-Class who are looking for even more customization.

The BRABUS ADVENTURE range is available for all variants of the current Mercedes G-Class.