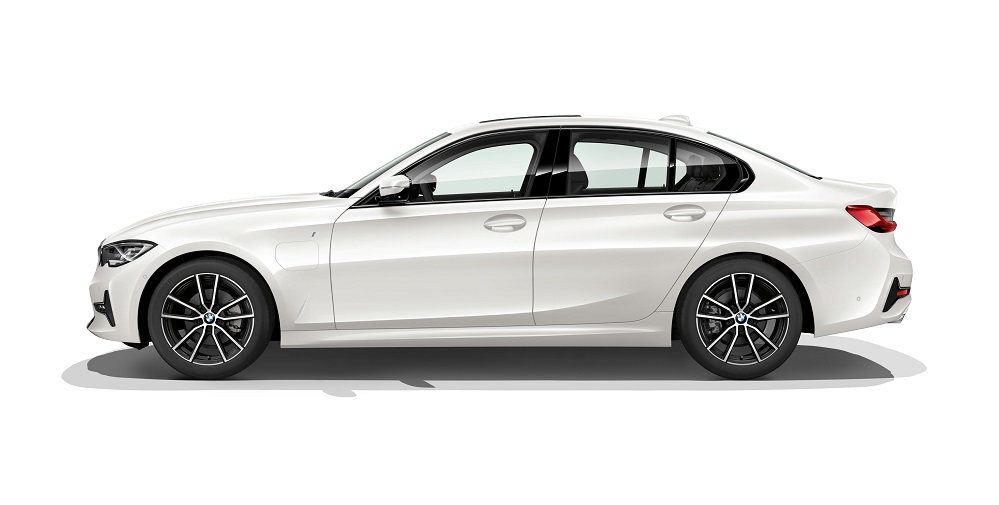 The new BMW 330e plug-in hybrid saloon represents something of a revolution, offering more efficiency, an increased electric-only range and the opportunity to take advantage of more power with standard-fit performance-boosting technology.

Due to be launched in summer 2019, the BMW 330e Saloon is 30 per cent faster than its predecessor, delivering a 50 per cent increase in electric-only range to go with a reduction in CO2 emissions of more than 10 per cent.

A major new addition to the new 330e is the standard-fit XtraBoost – an on-demand performance system that increases power output of the plug-in hybrid drive from 252hp by 41hp at the touch of a button.

As well as the extra power, the updated plug-in hybrid can cover a distance of up to 37 miles using electric power alone while average combined fuel consumption is now 138mpg and CO2 emissions are 39g/km.

The drivetrain: performance and efficiency

The plug-in hybrid drivetrain comprises a 184hp 2.0-litre four-cylinder petrol engine with BMW TwinPower Turbo Technology aligned to an electric motor that generates a continuous output of 68hp and a peak output of 113hp.

Together, the two drive units develop a total output of 252hp along with a peak torque of 420Nm, but extra power can be sourced when selecting the SPORT driving mode. This activates the XtraBoost system that draws on power stored in the high voltage battery. This offers the kind of performance and driving dynamics that are typical of the BMW 3 Series Saloon. For the first time in a BMW hybrid model, this includes an accelerator pedal curve that offers exceptional response and precision, along with a specific shifting programme for the eight-speed Steptronic transmission complete with brake downshifts. The XtraBoost can be used up to the minimum charge status of the high voltage battery and is also available for kickdown manoeuvres and in the M/S position of the gear selector lever.

Thanks to all this state-of-the-art technology, the new BMW 330e Saloon can accelerate from zero to 62mph in 6.0 seconds and can go on to a top speed of 143mph. It can travel up to 68mph when running on electric power alone – 18mph faster than the predecessor model.

The BMW 330e also offers a model-specific sound design to deliver a suitably throaty engine noise when the car is put through its paces. The aim is to offer the emotional impact of sports car performance to go with the proven qualities of a plug-in hybrid model. The hybrid-specific optional equipment features also include an acoustic pedestrian protection function, so that those about to cross the road can hear the car approaching when it is in electric-only mode.
Clever packaging, space-saving technology and a glorious soundtrack In order to save space, the BMW 330e’s electric motor is integrated into the eight-speed Steptronic transmission. This means the hybrid-specific transmission is only 15mm longer than the corresponding versions for conventionally powered BMW 3 Series saloons.

The new BMW 330e also features regenerative braking in order to optimise efficiency. The system stores the energy captured during braking with the electric motor taking on the function of a generator. The electrical energy fed into the high-voltage battery in this way or via connection to the power grid also serves to supply the vehicle electrical system. This means that a generator powered by the combustion engine is no longer necessary, increasing overall efficiency.

The 12.0kWh lithium-ion high-voltage battery in the new BMW 330e Saloon is positioned underneath the rear seats, while the fuel tank is located above the rear axle to ensure optimal luggage capacity. The total storage volume is 375 litres but can be increased by folding down the rear-seat backrests which are configured in a 40:20:40 split.

Virtually the entire range of optional equipment features for the new BMW 3 Series Saloon is available for the plug-in hybrid. As alternatives to the basic model, the new BMW 330e offers SE, Sport Line and M Sport versions. It can also be fitted with the Adaptive M suspension including Variable Sports Steering and the M sports brake system.

The full range of driver assistance systems to optimise comfort and safety are also available – ranging from the Park Assistant including reverse assistant, which is standard on all 330e models, to the optional Driving Assistant Professional with steering and lane guidance system. Preheating and pre-conditioning of the interior is standard on all models. Here the energy of the high-voltage battery is also used to power the auxiliary heating. At low outdoor temperatures, the interior can be heated prior to setting off even if the battery charge status is low.

From launch, new digital services will be on offer to make it more attractive and convenient to charge the battery while out and about. When selecting a public charging station, the navigation system also provides the driver with a list of recommended nearby hotels, restaurants, cafés, tourist attractions and cultural institutions, the driver receives the information along with a forecast of the occupancy status of the public charging station at the time of arrival.