The sophisticated new Audi A1 Sportback 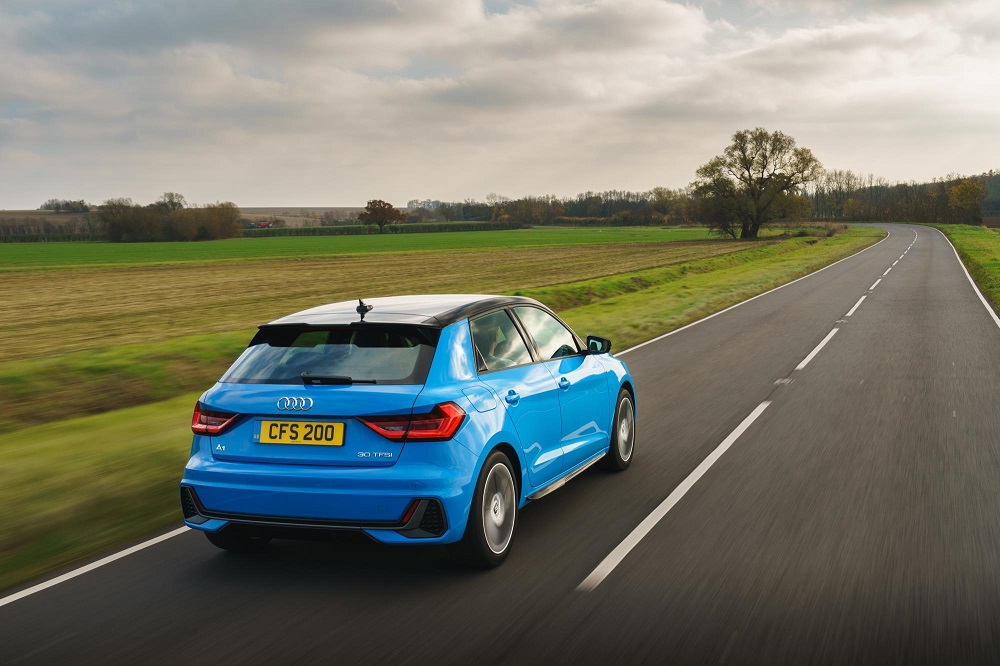 Since 2010 Audi has been compressing all that it stands for into the A1 – a premium subcompact hatchback that has the measure of the urban environment but is also fit to go the distance – and the all-new second generation of this diminutively proportioned yet immensely successful entry point into the Audi brand is now waiting in the wings. Available to order now exclusively as a five-door Sportback, ahead of first deliveries at the end of this month, the latest car features dynamic new styling that combines absolute modernity with classic detailing drawn from the brand-defining Ur quattros of the Eighties, and complements it with infotainment and driver assistance systems on a par with the contemporary full-size class.

Exterior design: Striking, purposeful with genes of the Ur-quattro
The A1 Sportback has grown significantly in length – extended by 56 millimetres, it now measures 4.03 metres. At the same time, its width has remained almost the same at 1.74 metres, while at just 1.41 metres high (excluding its aerial) it retains a low-slung stance which is emphasised further by the wide track and short overhangs. The wide, low-placed Singleframe grille and the implied side air inlets dominate the distinctive front, above which are three flat bonnet slits which pay homage to the Sport quattro, the brand’s rally icon from 1984.

The new A1 Sportback also gives a nod to its Audi Ur-quattro and Sport quattro ancestry when viewed from the side: The wide, flat sloping C-pillar seems to push the car forward even while standing still. The roof contrast line, which is available in Mythos black or Manhattan grey, ends above the C-pillar. This gives the impression that the roof is flatter and the complete car is even lower-slung. All lines on the flanks, from the window edge to the sill, slope upwards towards the rear in a wedge shape. The distinctively highlighted wheels and the low shoulder line in between give the A1 Sportback a solid stance on the road. The low line between the edges of the wings draws the visual focal point downwards even further.

The distinctive daytime running light graphics of the full-LED lights echo the dynamic wing shapes from sailing, known as hydrofoils. The design of the shutters for the main light functions also draws inspiration from sailing. The wing segments on the flanks create an impression of maximum width. A low-set, concentrated look in conjunction with the small rhombus segments in the top section of the headlights provides a sporty appearance.

The dynamic segmentation motif also features in the rear lights to reinforce the instantly distinguishable A1 light graphics. It is encased in the striking 3D geometry of the lens. The seamless light pattern of the graphics in the dark constitutes a remarkable feature of the two-part rear lights.

Unique specifications on the horizon
In the UK the new A1 Sportback will be offered in conjunction with SE, Sport and S line specification options, and in S line form the car’s dynamic character is brought into particularly sharp relief through numerous features.

These include larger air inlets, additional sill trims, an elongated slit centrally below the bonnet with two fins and a larger rear wing. A standalone specification that sits at the very top of the model range is the S line Competition, reserved purely for the 40 TFSI with 200PS. It is expected to open for order in early 2019, and adds its own air of strength and purpose with unique 17-inch platinum grey alloy wheels, red brake calipers, platinum grey door mirrors, sports suspension with adjustable dampers and twin tailpipes.

In addition to these trim levels, the latest A1 also expands on its predecessor’s already varied offering, and as a means of highlighting the scope for adding individual touches, two striking special edition models – the A1 S line Contrast Edition and S line Style Edition – will be available in the UK shortly after market introduction. Taking the S line specification as a foundation, and offered in a range of vivid colours, both have a design focus and a more sporting slant. Each will feature elements such as large 18-inch wheels in either bronze or black depending on the exterior finish, darkened LED rear lights referencing the classic Sport quattro, exclusive black colouring for the Audi rings in the Singleframe and the model identifiers on the tailgate and various exterior and interior styling packages with exclusive accents.

New look: the interior design
In the driver-focused cabin with its emotive, customisable design the eye is drawn in particular to the compact unit of air vents and the digital instrument cluster. All of the controls and touch-screen displays are strongly driver-oriented. The display and the air vent strip on the front passenger side are integrated into an area with a black glass look. In the dark, the cockpit can be brought to life by an optional contour and ambient lighting package that includes LED light elements in 30 selectable colours.

The cabin is also much more spacious, making life much more comfortable for the driver, front passenger and rear passengers. Despite the compact exterior dimensions and the tapering roof line, adults in the rear seats still enjoy plenty of head and leg room. Luggage capacity has increased by 65 litres to 335 litres, and with the rear seats folded down, this increases to 1,090 litres. The load sill height is a comfortably low 67 centimetres.

Fully digital: operation and display
The new Audi A1 Sportback is fit for the digital future. Even the entry level SE version features a fully digital instrument cluster with a high-resolution, 10.25-inch display and a multifunction steering wheel as standard. The optional Audi virtual cockpit with an extended range of functions presents comprehensive and diverse information such as animated navigation maps and graphics of some driver assistance systems in the driver’s direct field of vision.

Fully connected and always up to date: Infotainment and Audi connect
The infotainment concept in the new A1 Sportback has filtered down from the full-size class. The MMI radio plus comes as standard in the UK – it can be operated via the multifunction buttons on the steering wheel, the smartphone-style touch screen display in the fully digital instrument cluster or via the latest generation of voice control. All versions can be equipped with the optional Technology Pack, which adds hard disc-based MMI Navigation plus with a 10.1-inch MMI touch screen and the higher specification Audi Virtual Cockpit, plus the various internet-based services offered by Audi connect and Audi Phone Box wireless charging functionality.

Where Audi connect is fitted, MMI navigation plus offers A1 Sportback drivers functions such as hybrid route guidance – this calculates the route in the cloud, taking into account the entire traffic situation. Additional highlights are the satellite map view and the new 3D city models, which offer a precise map view of many urban centres. Up to four map updates per year are automatically downloaded and installed free of charge.

The Audi smartphone interface, which is standard for all versions, ensures everyone is always well connected on board the new A1 Sportback. It integrates iOS and Android smartphones using Apple CarPlay and Android Auto into an environment in the MMI programmed specifically for them, and offers two USB interfaces (1x USB-A, 1x USB-C with increased charging current).

Music and acoustics aficionados will be pleased to find a Digital Audio Broadcasting tuner featuring as standard, and the Audi sound system and Bang & Olufsen Premium Sound System available from the options list.

The B&O system drives eleven speakers with an output of 560 watts. Its 3D effect uses the windscreen as a reflecting surface.

The standard lane departure warning helps the driver to keep the car in the lane from a speed of 40mph. Also standard is the speed limiter, which reliably prevents the A1 Sportback from exceeding a selected maximum speed.

Another standard feature is Audi pre sense front. The radar sensor recognises critical situations involving other vehicles, crossing pedestrians or cyclists ahead of the vehicle, even when visibility is poor such as in fog. The system then gives an acoustic and visual signals to warn the driver. At the same time, it prepares for a possible full brake application and, if necessary, initiates automatic emergency braking in order to prevent an imminent collision or reduce its impact. If necessary, the protective measures of the optional Audi pre sense basic are initiated. The front seat belts are electrically tensioned, the windows are closed and the hazard warning lights are switched on.

The optional adaptive speed assist is also radar-based. It keeps the Audi A1 Sportback at the desired distance from the vehicle ahead. If the vehicle is equipped with the S tronic twin-clutch transmission, the system covers a speed range of 0 to 124mph; with the manual transmission, the range begins at approximately 18mph. In stop-and-go traffic, the A1 Sportback with S tronic transmission brakes to a standstill and moves away again under certain conditions automatically.

The new Audi A1 Sportback also offers various optional systems to make parking easier. For the first time, there is a reversing camera available in addition to the rear parking system. The front ultrasonic sensors of the system recognise objects in front of the car and emit acoustic and visual warnings.

Light and particularly robust: the body
The body of the new Audi A1 Sportback includes components made out of hot-formed steel that form the backbone of the passenger cell. The rigid body and precise panel fit form the basis for agile handling characteristics and the absence of intrusive noise on board. With a frontal area of 2.07 sq m and a drag coefficient of 0.31, the new A1 Sportback offers very little wind resistance.

Powerful and efficient: the engines
From market launch, the Audi A1 is initially available with a three-cylinder unit with a 1.0 litre capacity and 116PS – the 30 TFSI. Peak torque of 200Nm is available from 2,000 to 3,500rpm, enabling acceleration to 62mph in 9.4 seconds for the 7-speed S tronic version (9.5s for the 6-speed manual) and a top speed of 126mph in both variants. On 15-inch alloy wheels, fitted as standard to SE models, CO2 of 108g/km corresponds to a combined fuel consumption figure of 58.9mpg according to the WLTP test procedure in both manual and S tronic versions.

Very soon after launch, the range will increase to include power outputs that start at 95PS in the entry-level 25 TFSI engine and increase to 150PS in the 1.5-litre four-cylinder 35 TFSI with cylinder on demand (COD). A 2.0-litre, 200PS TFSI with 320 Nm (236.0 lb-ft) of torque will power the overtly performance-focused flagship model.

All engines are enhanced by turbocharging, direct injection and a particulate filter as standard, and can be linked to either a manual gearbox or the seven-speed S tronic dual-clutch transmission with the exception of the 200PS variant, which is matched to a six-speed S tronic transmission.

Poised for action – the suspension and ancillaries
The chassis configuration of the new Audi A1 Sportback delivers agile handling and a compelling driving experience. The front suspension is a McPherson construction; a compact, lightweight torsion beam is used at the rear.

As an alternative to the standard suspension on SE and Sport, tauter sport suspension is fitted as standard to S line models. The Audi drive select adaptive dynamics system allows drivers to select from four modes that influence the driving characteristics: auto, dynamic, efficiency and individual, and is fitted to all Sport models and above as standard.