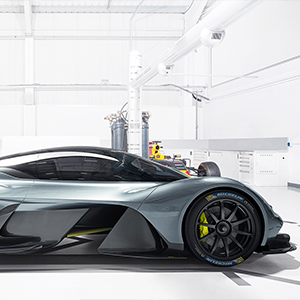 The stand, which overlooks the hill climb action at the Goodwood Estate for the Festival of Speed weekend, is the main attraction from Michelin alongside its longstanding presentation of the Supercar Paddock.

This year will see a number of supercars presented for the very first time as debuts on the Michelin main stand. Taking the central display will be the remarkable Aston Martin Valkyrie hypercar, featuring Michelin PS Cup 2 tyres exclusively and marking the fourth Aston Martin and Michelin collaboration in the last two years. The 900bhp, 6.5-litre V12 hypercar was co-developed with Red Bull Advanced Technologies, with 150 road cars to be built and delivered from next year.

Making its UK public debut at Goodwood, exclusively on the Michelin stand, will be the stunning Vanda Dendrobium 200mph all-electric hypercar from Singapore. Developed in conjunction with Williams Advanced Engineering in the UK and featuring Michelin Pilot Sport Cup 2 tyres exclusively, the Dendrobium will be presented by the team behind the car live on the Michelin stand each morning of the Goodwood Festival of Speed.

Revealed for the very first time just last week at Le Mans, and shown for the very first time in the UK at FoS on the Michelin stand will be the DSD Design Boreas hypercar from Spain. At the reveal with Michelin at Le Mans it was confirmed that just 12 examples of the Boreas will be built, featuring hypercar performance with more than 1000bhp from a plug-in hybrid powertrain offering more than 100km of pure electric range. The Boreas features Michelin Pilot Sport 4 S tyres exclusively, and more details will be revealed at the Festival of Speed.

Another star of the Michelin stand line-up will be the British-built Ultima Sports Evolution Coupe – a truly exceptional sports car inspired by Le Mans Group C styling and performance – boasting a top speed capability of 240mph and a 0-60mph sprint in just 2.3 seconds.

Stand visitors can also experience the rush of motorsport in Project CARS 2. Drive the Porsche 911 GT3 RS in 2017’s most anticipated racing game, months before it hits the shelves for XBOX One, PS4, and PC, on September 22.

More details on each of the display cars – and more on Superbikes, MotoGP and the all-new Project CARS 2 racing simulator – will be available live on the Michelin stand each day at the Goodwood Festival of Speed, alongside special presentations of Michelin’s Le Mans racing heritage with Porsche Motorsport, and the company’s lifestyle range of clothing and travel partners.