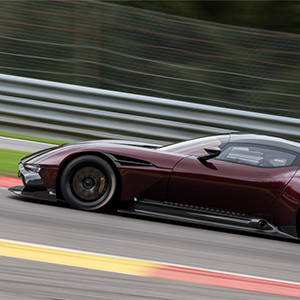 Aston Martin is set to fly up the Shelsley Walsh Hill Climb, as the iconic British brand has confirmed the attendance of the Aston Martin Vulcan at this year’s British Racing Green event on the 3rd and 4th June.

In 1913, the race-prepared machines of company founders Lionel Martin and Robert Bamford were regularly seen taking to Britain’s earliest hill climb tracks including the Worcestershire venue. Fast forward 104 years and the company is returning to its roots with its highly exclusive 820- horsepower track car, limited to just 24 examples worldwide.

The event, which provides manufacturers with the opportunity to test their creations at the historic venue, is set to celebrate all things British, Racing and Green and evoke the spirit of British Racing Green.

With a number of new classes for this event, including an Electric, SUV, Autonomous, Estate and Hypercar class, some new history is set to be created.

Crowds can expect to see Vulcan take to the hill twice on each day, alongside the venue’s regular hill climb competition and Midland Hill Climb Championship.

David King, Vice President & Chief Special Operations Officer said, “Aston Martin began life racing at hill climb events across Britain and it’s a pleasure for us to bring the company back to one of its earliest venues of competition. Shelsley Walsh is an iconic venue in the world of motorsport and it will be an epic sight for those attending on the day. We look forward to putting on an entertaining show”.

Mark Constanduros, Shelsley Walsh said, “This is fantastic news both Shelslely Walsh and Aston Martin have such strong links and to have Aston Martin support this new element to the event and to bring the Vulcan is superb. The brand is absolutely perfect and is what British Racing Green is all about”.

Shelsley Walsh’s British Racing Green takes place on the 3rd and 4th of June, with tickets available from £16 with an advance booking at www.shelsleywalsh.com

About the Midland Automobile Club and Shelsley Walsh Speed Hill Climb
The club was established at The Grand Hotel in Birmingham on the 11th January 1901 by a number of prominent members of the early motor industry whilst Queen Victoria was on the throne and as such is arguably the oldest motor sport club in the world.

Shelsley Walsh Speed Hill Climb is the oldest motor sport venue in the world still in continuous use. It was first used in 1905 and still uses its original layout, although there are a few close rivals. Our first speed event was held in 1901 on the edge of the rolling hills of the Cotswolds at Sun Rising Hill.

The club has always been innovative. In 1932, the BBC chose Shelsley Walsh for its first ever outside broadcast. Electronic timing was first introduced at Shelsley and in 1998 the club organised the first ever classic trial on the Isle of Man.

The MAC hosts rounds of the British Hill Climb Championship, The Midland Championship and The Leaders Championship, with classes for a variety of cars from road going to full on specialist hill climb cars. The MAC also organises sprints, sporting trials, classic car, and social events. The Midland Automobile Club features something for every motorsport and motoring enthusiast.