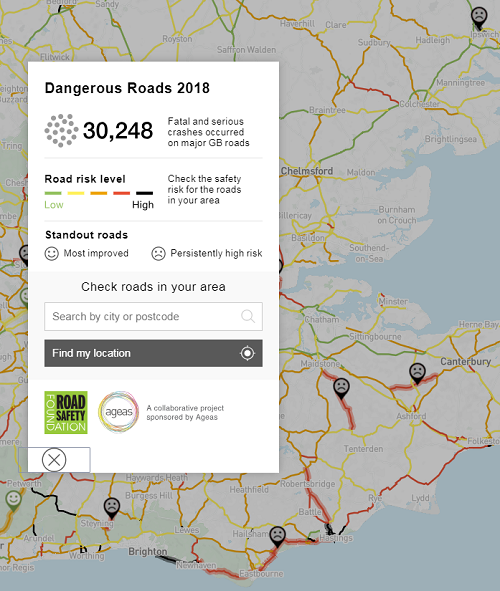 A new interactive ‘Dangerous Roads Map’ from motor insurer Ageas, using analysis from the Road Safety Foundation (RSF), has revealed Britain’s riskiest roads. In the report ‘Getting Back on Track’, Ageas and the Road Safety Foundation are together calling for an immediate investment of £75 million from the government, and a further £75 million annually for five years thereafter, to improve the riskiest roads. It’s estimated that this investment of £450m could prevent as many as 5,600 deaths or serious injuries over the next two decades with prevention value of around £2 billion.

Progress on reducing road deaths has stagnated since 2011, with 1,793 people killed on Britain’s roads in 2017, the highest number since 2011.  If Great Britain had been on track to halve road deaths within this decade, in line with international targets, an extra 2,549 people would not have lost their lives between 2010 and 2017.

The 40 ‘persistently higher risk’ roads identified in the Map had an average of at least one fatal or serious crash per mile along their length in the three-year survey period (2014-16).  A single investment of £75 million investment on these roads is urgently needed and would prevent an estimated 1,100 fatal and serious injuries over the next two decades.

The risk of fatal and serious road crashes is highest in the South East (26 fatal and serious crashes per billion vehicle kilometres), which is also home to the persistently highest risk road, between Margate and Ramsgate. The risk is lowest in the West Midlands and the most improved road is the A161 in Yorkshire, which has seen a decrease in fatal and serious crashes from 13 (in 2011-13) to 1 (in 2014-16) due in part to the re-routing of the road, engagement with motorcyclist groups and traditional lining and signing improvements.

The Safer Roads Fund was part of an investment package announced in 2016 by the Department of Transport to upgrade 50 of England’s most dangerous local A-road sections. This £100 million is projected to prevent 1,450 fatal and serious injuries over the next 20 years, with a prevention value of £550 million. And every £1 spent is projected to have societal benefit of £4.40 by not only addressing the human cost but by limiting hidden post-crash costs that include medical, ambulance, police, lost output, insurance and damage to property. But this fund hasn’t been replenished.

Commenting on the findings of the report, Andy Watson CEO of Ageas Insurance said: “It’s unacceptable that road crashes continue to cost lives. It’s also shocking that they cost society £35bn each year – that’s nearly 2% of GDP and more than we spend on primary education and GP services combined.

“We deal with the devastating aftermaths of serious road crashes every day. That’s why we’re calling for this investment. Infrastructure safety means much more than just filling in potholes. A reduction in crashes won’t just save lives – it’ll significantly benefit the economy. Fewer crashes mean fewer insurance claims – and saving an annual of £23.2m that we can pass onto our policy holders.”

Suzy Charman Executive Director of the Road Safety Foundation said: “The reality is that progress to reduce the rate of death and serious injury on our roads has flatlined since 2010.  The Safer Roads Fund has allowed the road safety community to demonstrate that investing in road safety engineering treatments really does have life-saving potential, and also stacks up as an investment when compared to other transport initiatives.

“If we’re to achieve the shared international goal of zero road deaths by 2050, we need to tackle road casualty reduction with purpose and determination. Continuation of the Safer Roads Fund would be one critical way of achieving that goal. Road deaths are preventable and we must get back on track.”

View the Road Safety Foundation (RSF) and Ageas Getting Back on Track report here: https://www.ageas.co.uk/globalassets/assets/newsroom/eurorapgb2018_gettingbackontrack.pdf