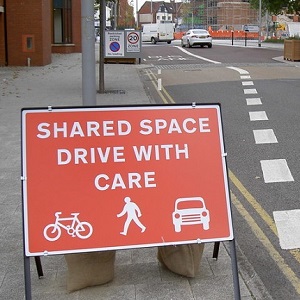 The Government has told local authorities to pause the development of shared space schemes while it reviews and updates its guidance.

Shared space schemes – where features such as kerbs, road surface markings, designated crossing places and traffic signs are removed – have been introduced in a number of town centres in recent years.

The schemes are designed to create a safer road environment – with the theory that drivers will reduce their speed because of uncertainty over who has priority.

However, shared space has received criticism, including from the Royal National Institute of Blind People (RNIB), who told BBC News they have turned some high streets into ‘no go zones’ for visually impaired people.

In its ‘Inclusive Transport Strategy’, published on 25 July, the Government acknowledged that many people and organisations have ‘significant concerns’ about the schemes.

The report says a pause will allow the DfT ‘to carry out research and produce updated guidance’ – but gives no detail as to how long the ‘pause’ will last.

Nusrat Ghani, transport minister, told the BBC that visually impaired people do not have “the confidence they need to enter communities and city centres where they need to share a space with someone driving a car”.

The RNIB is now calling on the Scottish Government to also review its policy on shared spaces ‘as a matter of urgency’.

The new DfT Inclusive Transport Strategy, backed by hundreds of million pounds, is designed to improve accessibility across all types of travel for those with ‘visible and less visible’ disabilities.