Cutting edge technology that monitors tyre pressures, tread depth and the axle weight of HGVs has been hailed for its potential in boosting safety on the roads. 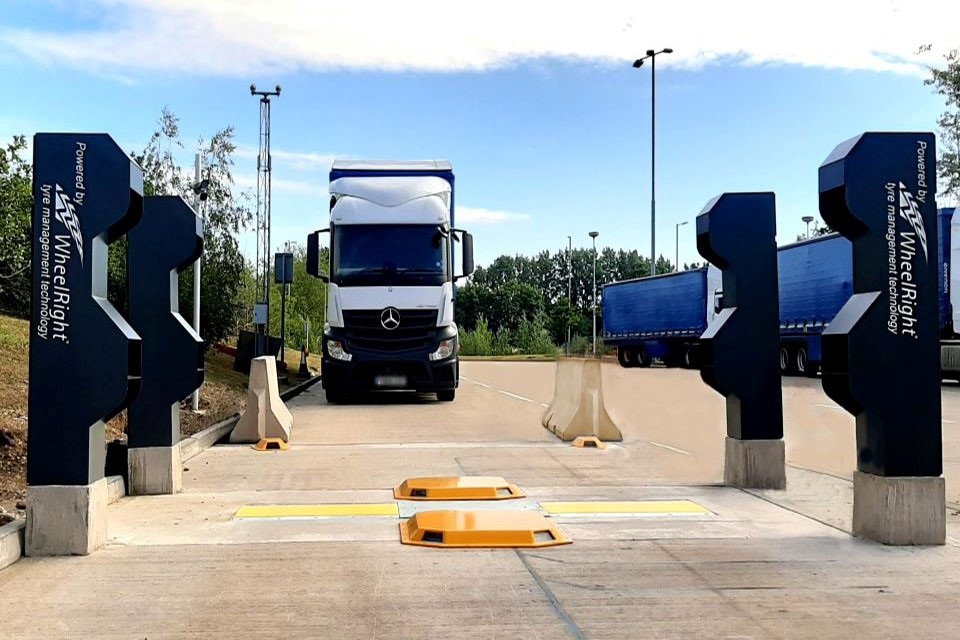 Trials, funded by Highways England’s designated fund for innovation, have proved hugely successful with one in 12 of 100,000 tyres checked found to be underinflated and the Driver and Vehicle Standards Agency (DVSA) identifying 5,000 overweight vehicles a month.

Now there are plans to roll the system out at strategic route locations across the country.

Highways England’s Commercial Vehicle Incident Prevention Team (CVIPT) backed a pilot of the sophisticated WheelRight quartz senor system at Keele Services on the M6 before running year-long trials with John Lewis at Milton Keynes, AW Jenkinson Transport at Penrith, and the DVSA check site at Cuerden, on the M62.

The system comprises a set of high-intensity strobe lights, all-weather cameras and drive-over pressure instruments – all collecting huge amounts of data within seconds which allows for adjustments to be made to ensure that tyres are compliant with safety standards.

CVIPT, who championed the ground-breaking system along with a host of other commercial vehicle safety initiatives, scooped Highways England Chairman’s Award and the Excellence in Safety Innovation Award.

The team was one of 30 winners rewarded at the third Highways England Awards, designed to recognise activities which further the company’s imperatives of safety, customer service and delivery. This year the award ceremony was held online.

Individuals and teams from within Highways England as well as its supply chain partners were among those recognised in the awards.

Highways England Chief Highway Engineer, Mike Wilson said: “We are constantly looking for ways to ensure everyone who travels or works on our network gets home safe and well and CVIPT can be very proud of the work they are doing to help us achieve this.

“The awards that the team have won not only endorses their work, but also the companies and partners helping to bring forward the ground-breaking innovations employed to embed improved safety in the commercial vehicle sector.”

DVSA’s Director of Enforcement, Marian Kitson, added: “We’re really pleased that vehicle safety has been recognised in this way, and that DVSA and Highways England continue to work in partnership exploring new and innovative ways of ensuring the compliant operation of commercial vehicles on the roads network”.

Other projects that CVIPT have brought forward include working with tyre firm Bridgestone to analyse the causes of tyre-related incidents and tyre damage by analysing 1,000 pieces of debris, launching a free smart phone app in collaboration with the Transport Research Laboratory that simulates HGVs blind spots and working with the Health and Safety Executive and industry to drive forward load security best practice.

Judges noted CVIPT had delivered a range of initiatives with partners delivering innovative measures which build on best practice.