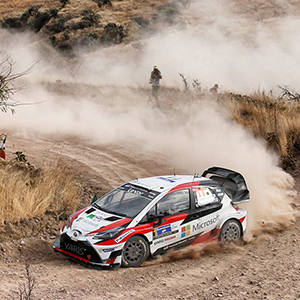 From the snow and ice of Rally Sweden, Toyota Gazoo Racing World Rally Team face the very different challenges of intense heat and high altitude as they prepare for next week’s Rally Mexico (8 to 11 March).

Competing in one of the toughest events of the season, they hope to demonstrate the progress made in developing the Yaris WRC and build on a strong start to the year that sees them sitting just one point off top place in the manufacturers’ championship.

Drivers Jari-Matti Latvala, Esapekka Lappi and Ott Tänak are all in the top five in the drivers’ standings.

Rally Mexico, the first gravel contest of the year, is famous for hot conditions that can top 30°C and for thin air at high altitude that can reduce engine power by as much as 20 per cent.

Tommi Mäkinen, Team Principal, said: “We have done quite a lot of work to improve from last year, when Mexico was quite tough for us with our new car. Since then we have analysed everything that happened. We have improved the cooling, and we have improved the engine. We have even been in an altitude dyno in Japan. We have put quite a lot of effort into these areas and I hope that altogether it will be enough to give us a competitive package. But we will only know for sure once the rally gets under way.”

The rally will start in spectacular style with a stage through the streets and tunnels of Guanajuato. Further spectator-friendly stages will be run on Friday and Saturday, with Friday’s schedule also including two runs through El Chocolate, the longest stage of the rally at more than 19.5 miles, reaching 2,700 metres above sea level at its highest point. Sunday’s final day will feature three stages, including a points-scoring Power Stage at Las Minas.