Unsafe lorries to be ‘banned’ from London 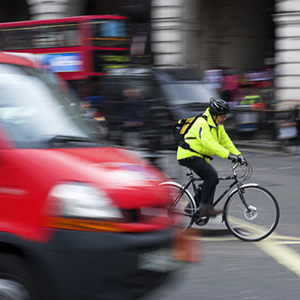 The Safer Lorry Scheme will operate 24 hours a day, seven days a week

Large lorries without safety equipment are to be “effectively banned” from London’s roads to protect cyclists from 1 September.

The Safer Lorry Scheme will operate 24 hours a day, seven days a week and any vehicle weighing more than 3.5 tonnes will need to have side guards and extra mirrors to protect the city centre’s cyclists, with all roads in Greater London being covered by the ban. There will be a maximum fine of £1,000 for breaching it.

It will be enforced by the police, the Driver and Vehicle Standards Agency and a joint TfL and DfT-funded taskforce.

The Mayor of London, Boris Johnson, said: “In my Cycling Vision, I said that no lorry should be allowed in London unless it is fitted with equipment to protect cyclists […] We know that a large number of cyclist deaths and serious injuries involve a relatively small number of trucks and lorries that are not fitted with basic safety equipment.”

The ban will be enforced by CCTV cameras (surprise surprise) and on-street checks, subject to approval by the Department for Transport.

In response to the news, the FTA’s Head of Policy for London Natalie Chapman commented: “We believe that this kind of blunt regulatory tool is not the best way to improve cyclist safety. We still think that the money and effort spent on this scheme would have been better spent on increased enforcement against the small proportion of lorries that don’t comply with existing regulations.”

The FTA have now advised all operators to ensure that any lorry that may need to access Great London in future has sideguards and Class V and VI mirrors fitted before 1 September unless it is subject to one of the remaining exemptions or concessions.