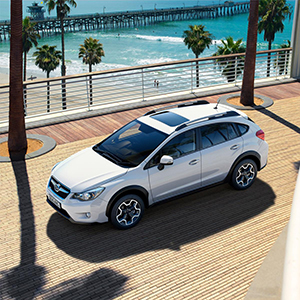 Subaru UK has announced a raft of modifications and upgrades to the interior and chassis of its XV compact crossover. The interior changes result in further significant improvements to cabin refinement and ambience, and include an all new factory-fit infotainment system first seen on the new Outback earlier this year.

Boasting the lowest centre of gravity in the compact crossover class – and the highest ground clearance – changes to the car’s suspension have been designed to result in a smoother, more compliant ride but without sacrificing any of the stability that the XV is renowned for.

The upgraded Subaru XV goes on sale through the Subaru UK dealer network this month.

Among the most important changes to the upgraded XV is a revised interior, which now features improved materials and an all-new touchscreen infotainment and navigation system.

The interior design now has a higher-quality look and feel thanks to the adoption of an all new instrument binnacle and new metallic and piano black accents throughout the cabin for the central console, dashboard and steering wheel switchgear and arm rests; Lineartronic models get a new shift lever and new housing with metal and piano black accents.

The driver’s LCD instrument binnacle has been completely redesigned and features more upmarket, contemporary blue dials with new graphics. The overall result of these changes is a more contemporary and cosseting ambience.

An enhanced infotainment, navigation and audio system is now fitted as standard to all XV models in the UK. The all-new 7.0-inch touchscreen display allows smartphone-style control over the advanced navigation and infotainment features, with a swipe and pinch control function for map displays. The infotainment display echoes the new blue glow of the driver’s instrument binnacle.

The infotainment system and other vehicle functions can also be controlled through Subaru’s latest-generation voice control facility. This allows the driver to keep their eyes on the road ahead while selecting a favourite radio station or album, setting a new satellite navigation destination or changing the power or temperature of the climate control system.

The system’s smartphone functionality extends to a range of apps that can be downloaded onto users’ phones or tablets, which pair-up via Starlink – these include weather and traffic reports, wireless audio, news updates and a calendar.

The passenger can also now engage with the car’s dashboard-top Multi-Function Display (MFD), with the control switch moved from the steering wheel to the centre of the dashboard. The MFD provides a range of information relating to a number of the car’s systems, including the status of its permanent  All-Wheel Drive system, as well as fuel economy and trip information.

The car also now receives an extra USB jack, allowing occupants to listen to music from one USB-compatible device while charging another at the same time. The centre-console cup holders have been re-designed and now feature a sliding cover.

The Subaru XV is sold as standard with a Symmetrical All-Wheel Drive powertrain and the brand’s advanced Vehicles Dynamics Control system. With its 220 mm ground clearance and lowest-in-class centre of gravity, the Subaru XV has always been  remarkably stable in all conditions. For the upgraded model, Subaru engineers’ key focus was to improve the car’s ride quality and reduce the intrusion of noise, vibration and harshness (NVH) into the cabin.

For both front and rear suspension, the dampers have had their pitch rate lowered, resulting in a smoother and more comfortable ride than earlier models, while reducing roll slightly. The damping power of the struts and new coil-spring settings now better suppress the transfer of vibrations into the cabin, while further reducing roll for greater cornering stability.

The rear suspension features new spring rate settings to further improve stability under cornering by ensuring greater tyre contact with the road, while allowing for greater flexibility in ride over broken road surfaces.

A 10% quicker steering ratio (down from 15.5:1 to 14.0:1) has been adopted to improve the XV’s steering response and provide more linear, direct and stable handling characteristics, requiring only 2.8 turns, lock-to-lock. The front cross-member has also been stiffened to improve steering stability.

Noise from inside the cabin has been reduced thanks to the more widespread application of sound-absorbent material throughout the car, further cutting the intrusion of vibrations and engine, wind and road noise into the cabin. This has been managed with the adoption of new under-bonnet insulators, extra sound-deadening material throughout the floor of the car, and sealing and sound-absorbing materials around the front and rear quarter lights and door lips.

The XV’s under-body cover has also been reshaped to reduce wind roar around the rear of the car, while thicker glass for the front side windows and front quarter lights further reduces wind noise around the A- and B-pillars.

The upgraded XV’s cabin is now 1dB quieter under acceleration or when travelling at high speed, providing a quieter and more relaxed environment for occupants.

In spite of all the changes, the upgraded Subaru XV retains its existing on-the-road price, with the range starting from £21,995. Buyers of a new XV  currently receive 3 years’ free servicing and a £1000 deposit contribution from Subaru UK. The car is offered with Subaru UK’s comprehensive five-year, 100,000 mile warranty.