Mitsubishi dealership brings ‘thirst aid’ to hospital and others 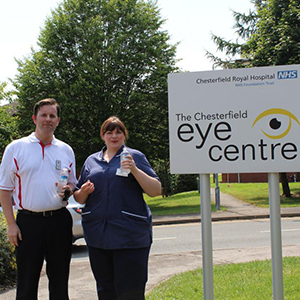 A Mitsubishi dealership in Derbyshire showed it had a lot of bottle when it helped a hospital promote the importance of staff drinking plenty of water during their shift.

Gilder Mitsubishi Chesterfield spotted Chesterfield Royal Hospital’s Facebook plea to businesses for bottled H2O and quickly responded, saying it would be there the next day, as it understood the importance of people keeping hydrated.

Daniel Wheeldon, Sales Manager at the Lockoford Lane dealership, said: ‘When we saw the appeal we just had to see what we could do to help. We already had some 700 bottles but overnight I couldn’t sleep thinking that the hospital has 3,600 staff, so I decided to buy some more bottles – 3,000 more.’

He and his team had the ideal vehicles in which to take the water to the Chesterfield Road hospital – two Mitsubishi L200s as well as a parts van.

But their generosity went even further. Dan added: ‘At the end of the afternoon, when we were certain that the hospital had enough for every member of staff – and a few more – I kept 10 crates and dropped some off at the local police, fire and ambulance stations, as well as at Chesterfield Care Group, which is an elderly people’s day care charity where my mum works.

‘The emergency services in the area had been busy that day at a lorry fire on the M1, even handing out water of their own to people stuck in traffic.’

The bottles were gratefully received by everyone – especially because of the heatwave being experienced – although not all of the recipients were initially enthusiastic about the gift. ‘The woman at the police station was suspicious at first and wanted to ensure they were sealed bottles!’ said Daniel. But he added: ‘It was a real pleasure and surprise to see what I felt to be a small gesture be so well received.’

Responding on its Facebook page, the hospital said: ‘We can’t believe what an amazing bunch of people work at Gilder Mitsubishi in Chesterfield! Thanks to Daniel and the whole Gilder team. We are so lucky to have such great support from our business community!’

And a Twitter user who is a police officer with the handle PC Blue tweeted: ‘Nice bit of “looking after the cops there”. Good work Mitsubishi!’ The police also shared an image of some of the water bottles from Gilder Mitsubishi Chesterfield to the UK Cop Humour website and Facebook page, where it drew a lot of appreciative comments including one from Australia.

It just goes to show that when the heat is on, you can definitely depend on Gilder Mitsubishi Chesterfield!