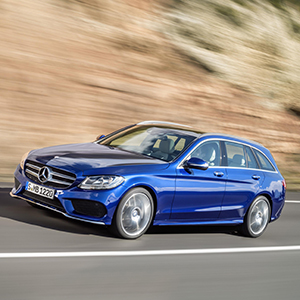 Mercedes’ new C-Class Estate will hit the UK in September priced from £28,055, it has been confirmed.

Fuel Consumption
up to 65.7mpg

Starting the range is the 184hp C 200 petrol, which emits 128g/km of CO2 and is available with a six-speed manual or seven-speed automatic gearbox.

Two further engines – a C 200 BlueTEC diesel and the C 300 BlueTEC HYBRID – will join the range later in the year.

Linked to each engine range is the choice of three model lines – SE, Sport and AMG Line.