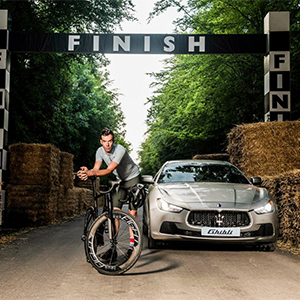 The thrilling exploit, in keeping with Goodwood’s theme for this year’s Festival of Speed ‘Flat-out and Fearless; Racing on the Edge’, sees man become one with machine as Millar, the former National Time Trial Champion, races up the 1.16-mile course in a Maserati Ghibli Diesel, in addition to cycling down the challenging hillclimb route, where he reached a top speed of 50mph on his Factor Vis Vires road bike.

Millar said: “As a true petrol head, there’s no better place to set a cycling speed record than the most iconic automotive venue in the country.

The descent is steepest at the top, but you only have a limited time to get to a high speed as before you know it you’re passing the famous flint wall and braking hard into Molecomb Corner, you really have to trust your instincts. It was a real buzz and something I never expected I’d be doing on my road bike.”

Maserati will be showcasing its range of ultra-luxurious executive saloons to the crowds of thousands at this year’s Moving Motor Show for the first time. The Maserati Ghibli Diesel and Ghibli S will be available for the public to experience alongside one of Maserati’s pro-driver instructors.