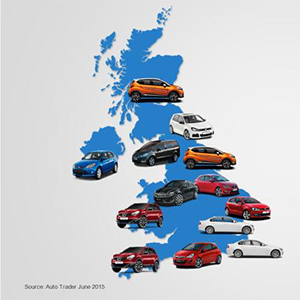 Auto Trader has published figures revealing the fastest selling cars, nationally and by region in June. Overall, cars in the national top ten sold more quickly than their equivalents in May, taking an average of 20.7 days to turn compared with 22 days. That compares with an average of 55 days for all cars on forecourts.

The average price of the nation’s quickest sellers also fell significantly month-on-month, from £14,953 to £9,450.

In terms of models, Vauxhall’s Insignia was the only car to take its place in both May and June top tens. The 2010 petrol hatchback took fifth spot in May and fourth place in June. The 2011 Insignia took ninth spot in June too.

Once again the regional fastest seller leagues revealed the popularity of the Nissan Qashqai. As well as taking top spots in the South West and Wales, the Sunderland-built model also made third position in London and fifth in its home territory, the North East.

“Stalwarts like the Nissan Qashqai continue to demonstrate their value as a forecourt acquisition, but this month we’ve also seen less obvious cars like the Chrysler Ypsilon make it into the national top ten,” said Karolina Edwards-Smajda Auto Trader Director, Retailer & Consumer Products. “What’s really interesting however is the variation in speed-of-sale by different regions.

“In London, the North West and Scotland, cars in the top ten took an average of less than 20 days to sell. However, when looking at the East of England, Wales and the South West, we found that they took more than twice as long to leave forecourts: the average top ten model taking more than 40 days to turn.”