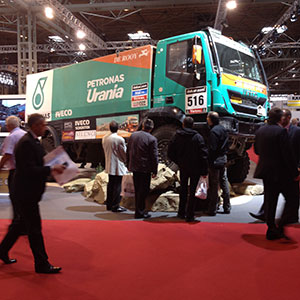 The ultra-tough truck is on show at the Italian manufacturer’s stand alongside several other offerings, including an on/off-road Euro VI Trakker Hi-Land 8×4 tipper chassis, a Stralis Hi-Way, Stralis Hi-Road and latest-generation Eurocargo.

Nigel Emms, Press and Public Relations Director at Iveco, said that the Show had so far been a resounding success for Iveco, and busier than last year.

“From our point of view the economy is starting to improve a lot, and more companies are starting to move away from focusing solely on fuel economy.

“There is a lot of interest in particular in our new Euro VI truck range.

“The main focus of this show is total cost of ownership; and the early signs are that the public are moving towards that way of thinking.”