Infiniti sets new sales record in the first half of 2015 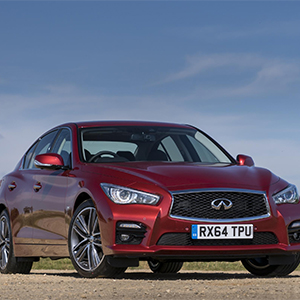 Infiniti sold a record 103,500 new vehicles around the world in the first half of 2015, up 13% over the same period last year. On the back of a best-ever salesperformance in 2014, Infiniti delivered another all-time-high result and for the first time sold more than 100,000 vehicles in the first six months. The brand also set records in China, Asia & Oceania, and EMEA (Europe, Middle East & Africa), as well asmany key individual markets including Canada, Mexico, South Africa, and Australia.

Infiniti also achieved its best global June salesin its history by delivering more than 16,800 vehicles around the world, representingan increase of about 2,500 vehicles or 17% versus June 2014. In fact, from September 2014 to June 2015, Infiniti has been on a streak of 10 consecutive best individual months on record.

“Infiniti has been building a lot of momentum setting numerous global sales records in the past two years,” said Roland Krueger, President of Infiniti Motor Company Limited. “This would not be possible without the trust and support from our dealer partners and our customers. We will continue to makestrong progress towards ourgoal of becoming an established tier one global premium brand.”

In the Americas (U.S., Canada, Mexico, and Latin America), Infiniti delivered more than 70,700 vehicles in the first half of 2015, an increase of 8% compared to the same period last year. In the J.D. Power 2015 U.S. Initial Quality Study (IQS) that was released in June, Infiniti improved to fifth place overall (from its 23rd rank in 2014), making it the largest rank improvement of any brand.

In China, Infiniti’s second largest single market, the company reached an all-time half-year record. From January to June, Infiniti sold more than 18,900 vehicles in China, an increase of 36% year on year. The past month also marked the best June in Infiniti China’s history, with sales of more than 3,300 vehicles and a 33% increase from 2014. Infiniti significantly outperformed the overall automotive market in China which has slowed down considerably.

In the highly competitive EMEA region, Infiniti sold almost 11,200 vehicles, representing an increase of 7% and marking an all-time record for the first half of the year.  Infiniti also achieved its best half-year result in Asia & Oceania. The company sold more than 2,600 vehicles in the region, up 26% over the same period last year.

The sales growth has been spurred by a strong product offering led by the new Q50 sports saloon. Beyond Q50, Infiniti laid out plans to further expand its portfolio based on the much acclaimed concept cars that had been introduced during the last two years: Q30 Concept, Q60 Concept and QX30 Concept. The Q30 production version will be unveiled at the Frankfurt Auto Show in September this year. The car will go on sale in Europe towards the end of the year with other markets following shortly after. Q30 will mark Infiniti’s first-ever entry into the compact segment.

Along with the expanded product portfolio, Infiniti is also growing its manufacturing footprint and dealer network. In 2014, Infiniti began vehicle production in Xiangyang, China and engine production at the Infiniti Powertrain Plant in Decherd, Tennessee, in the U.S. Later this year it will begin manufacturing the Q30 in Sunderland, U.K. The brand has also grown its dealer network by about 9% in 2014 to 490 globally and continues the expansion aggressively around the world.

“Infiniti has established a strong foundation in the first half of 2015. We enter the second half with great confidence. With powerfuldesign and state-of-the-art technology, Infiniti has an excellent offering for our customers. We are well positioned to carry forward our current momentum,” said Krueger.