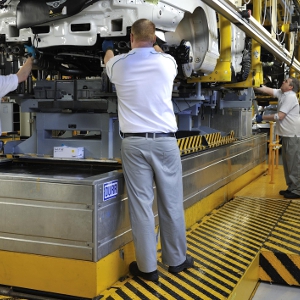 Bentley Motors has been recognised for its commitment to excellence in manufacturing, after being named as the European Industrial Excellence Champion by a panel of Europe’s leading academic institutions.

Bentley was awarded UK national champion status earlier this year, before competing against other winners from across Europe, and picking up the ultimate prize. This is the first time a British company has been named as European Champion in the 20 year history of the award.

This achievement follows an intensive assessment, beginning with judges visiting Bentley’s headquarters in Crewe before requiring all finalists to present to a panel on company values, business strategy and development practices.

Judges highlighted the company’s focus on a continuous improvement culture, and the resulting impact on revenue growth and productivity. Also praised was the success of the organisation’s policy and process deployment in maximising efficiencies in production.

Commenting on the award, Michael Straughan, Bentley’s Member of the Board for Manufacturing, said: “We’re very proud to receive this award, not only as recognition for our success as a business and the commitment of our valued workforce, but also a celebration for excellence in British manufacturing, something that is often forgotten.

“Bentley has worked hard to stay at the forefront of UK industry, continuously looking at ways of maximising production efficiencies, while maintaining the high level of skill that goes into making every single Bentley. We are evolving as a business, launching new models such as Bentley Bentayga, and this is only possible with a committed and passionate workforce, and it’s pleasing to see this is being independently recognised.”

Dr Jane Davies, senior faculty at University of Cambridge Judge Business School and Director of the Cambridge MBA, who was part of the judging panel, praised Bentley for its efforts in skill development: “Bentley exemplifies excellence in both car production and specialist skills. What is particularly impressive is how Bentley has married the efficiencies of production with high quality craftsmanship, while achieving a step change in improvements in productivity.”