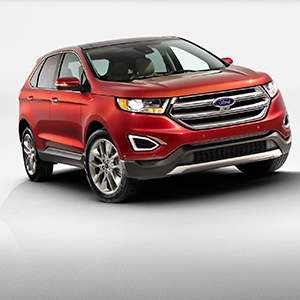 Ford have unveiled the all-new Edge.

The four-door, five-seat vehicle, which will hit the UK next year, will be the flagship of the manufacturer’s SUV lineup in Europe, ahead of the Kuga and EcoSport.

Stephen Odell, President of Ford of Europe, Middle East and Africa, said: “We are leveraging our One Ford portfolio to offer a broader range of products to our customers in Europe.

“This year we have already launched EcoSport, with new Mondeo and Focus on the way.

“Next year, we will launch all-new Edge, new Mustang for the first time in Europe – as well as our Vignale range.”

First launched in North America in 2007, the Edge is credited as establishing the crossover SUV segment.

Today, Edge is consistently a top-selling vehicle in the segment in North America – achieving record sales in 2013 – and is offered for sale in selected markets in South America, Russia and eastern Asia.

“The styling and suite of comfort, convenience and safety technologies in Edge rival the premium offerings in Europe.”