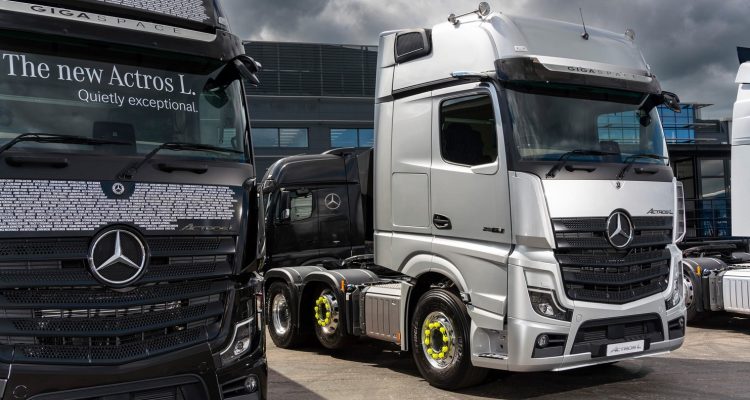 Mercedes-Benz Trucks underlined its technological supremacy at last week’s (11-12 May) ITT Hub event and conference with an impressive product presentation that emphasised the breadth of its range and included UK debuts for three more exciting innovations.

A highlight of the manufacturer’s stand was the 6×2 Actros L GigaSpace tractor unit with mighty 460 kW (625 hp), 15.6-litre in-line six-cylinder engine, which is the first vehicle in the country to be fitted with second-generation MirrorCam technology. 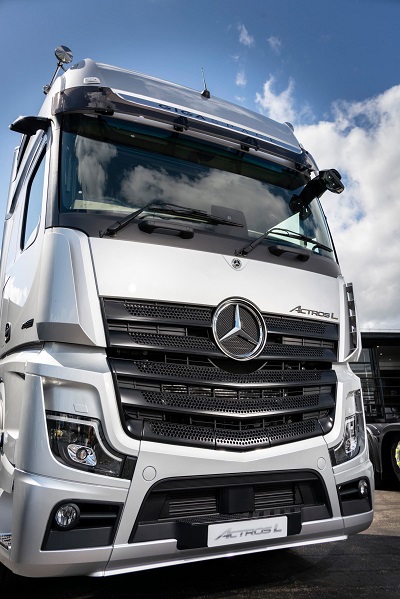 Aimed at long-distance hauliers and those engaged in heavy-duty distribution, the Actros L is also available as a six-wheeled tractor with single or double drive axles, and as an 18- or 26-tonne rigid chassis. It is equipped with a host of new features that deliver further improvements in efficiency, safety and comfort

Actros L was unveiled at Truckfest earlier this month, but as part of a static display. One of the two vehicles fielded by the manufacturer for the on road ride ’n’ drive was a 4×2 Actros L tractor unit. It marked a first opportunity for visitors to gain an on-road experience of a vehicle that boasts more sophisticated aerodynamics and cabs – 2.5m-wide, and flat-floored –that are quieter and offer improved heat insulation. The new model also has a lower, more comfortable seating position providing better visibility.

The Actros L assigned to the ride ’n’ drive was equipped with two driver aids that were being seen in the UK for the first time: Active Drive Assist 2, the latest, enhanced version of the ground-breaking autonomous driving system, and Sideguard Assist, a safety feature that until now was only available in right-hand drive form on low-entry Econic chassis.

The vehicle’s GigaSpace cab has been specified for training purposes with twin bench seats, which meant Senior Truck Trainer Alistair Colquhoun was able to demonstrate the capabilities of both systems to up to seven attendees.

Active Drive Assist is the first level 2 autonomous driving system to enter series production. It manages the vehicle’s speed to keep it a safe distance from traffic ahead, and steers it to keep its position in the centre of the lane. The driver always retains overall control, though, and must keep hands on the steering wheel at all times. Active Drive Assist encourages a more relaxed and fuel-efficient driving style, thereby increasing safety.

Sideguard Assist employs a radar sensor module that monitors the left side of the vehicle, including the trailer. It provides significantly improved protection for the most vulnerable road users by providing early warnings that help drivers to avoid collisions when turning left with cyclists, pedestrians or street furniture. 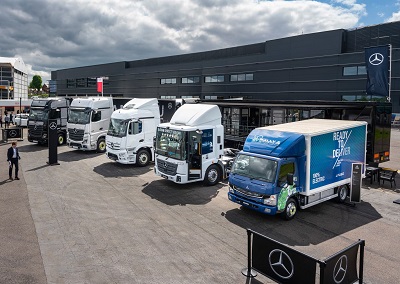 Other static exhibits on the Mercedes-Benz stand included:

Like all diesel-engined trucks bearing the three-pointed star, these vehicles can be operated on bio-fuels such as HVO (Hydrotreated Vegetable Oil) without any modification, cutting CO2 emissions by as much as 90%.

Completing Mercedes-Benz Trucks’ product presentation at ITT Hub was a battery-electric FUSO eCanter – FUSO, like Mercedes-Benz, is part of the Daimler Truck family. Widely acknowledged as the first economically viable, fully electric truck, the 7.5-tonne FUSO eCanter produces zero tail-pipe emissions. Some of the biggest names on UK roads have been benefiting since 2018 from the eCanter’s highly competitive body and payload allowance of up to 4.5 tonnes, as well as valuable operating cost savings. 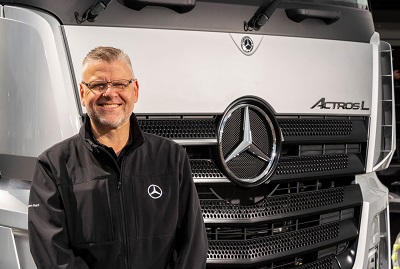 Oliver Soell, Head of Product at Mercedes-Benz Trucks, declared: “Mercedes-Benz is the world’s oldest truck maker and innovation has always been key to our success – it’s in our DNA. Today, no other manufacturer offers a range of vehicles that is so comprehensive and so packed with new technology.

“From MirrorCam and the Multimedia Cockpit with its TruckApp Portal, to the latest versions of Active Brake Assist and Predictive Powertrain Control, Mercedes-Benz engineers continue to develop and refine systems that relentlessly raise the bar in terms of efficiency, comfort and safety.” 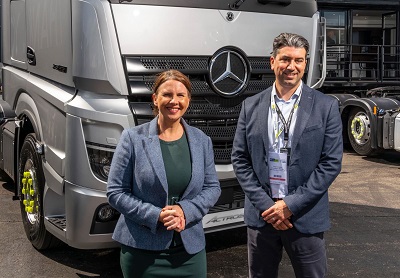 Trudy Harrison, Parliamentary Under Secretary of State at the Department for Transport, met eConsultancy Manager James Venables on the Mercedes-Benz Trucks stand at ITT Hub

Much of the focus at ITT Hub was on how the transport industry is revolutionising technology, equipment and strategies as it transitions to Net Zero. During her visit to ITT Hub Trudy Harrison, Parliamentary Under Secretary of State at the Department for Transport, revealed that Government plans to accelerate the decarbonisation of the transport industry by injecting over £200 million into an extensive zero emission road freight demonstrator programme.

Mercedes-Benz Trucks has adopted a twin-pronged approach based on the application of both battery-electric and hydrogen fuel cell technologies. The first eActros rigids will be arriving in the UK imminently, with eEconic due later this year. Next comes another battery-electric truck, the 40-tonne eActros LongHaul tractor unit with 500 km range, which is expected in 2024. Further down the line, the first hydrogen fuel cell-powered Mercedes-Benz GenH2 Trucks should be on UK roads by the end of the decade.

“Other manufacturers have aligned themselves to one or other of these technologies but our zero-emission strategy hinges on a strong commitment to both,” said James, who was recently identified by GreenFleet as among the top 40 most influential figures now shaping the zero- and low-carbon transport sector.

Mercedes-Benz Trucks has lent its backing to a call from National Grid, issued on Wednesday, for early Government investment in the road charging network, to meet the requirements of electric trucks. “The provision of suitable HGV charging infrastructure on the UK’s Strategic Road Network is essential to the success of Daimler Truck’s decarbonisation strategy,” said James. “Collaboration is key for our customers to meet their zero-emission goals.”