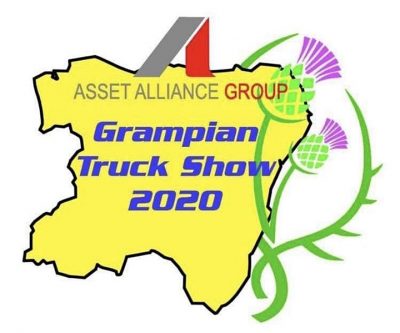 Scottish trucking favourite, the Grampian Truck Show, is returning after a 13-year hiatus – this time as a not-for-profit event, raising money for local charities – Charlie House and STV Children’s Appeal.

The event, which was last held in 2007, will take place on Saturday 18th April at the Thainstone Agricultural Centre and is being sponsored by commercial vehicle specialist, Asset Alliance Group.

It is hoped more than 300 exhibitors will showcase a range of vehicles including Super Trucks, heavy haulage combinations, light commercials, classic trucks as well as fleet and trade assets, and the day will also include an awards programme and charity auction.

The event is organised by Ally Shaw, Ally Shaw Junior & Stuart Strathdee. Ally Shaw Snr, who launched the first event in 2003, believes it is the perfect time for the Grampian Truck Show to return, and said they are excited about making this year’s show the biggest to date in the north east of Scotland.

He says: “We had been thinking about bringing back the show for some time and once we made the decision we received an incredible response from across the whole of Scotland which is so encouraging.

“We’re also delighted to welcome Asset Alliance Group as headline sponsors, and so thankful for their support.”

He adds: “This is our first time at the Thainstone Agricultural Centre, and it’s such an impressive venue it has given us the opportunity to really expand the show. The team there are being fantastic with arrangements and as a non-profit event, we hope to raise significant funds for some really deserving local causes.” Asset Alliance Group CEO, Willie Paterson, says: “We had no hesitation in getting involved in such a fantastic event for Scotland, which we are pleased to see back on the events calendar for 2020.

“The fact that all proceeds will go to charity makes it all the more worthwhile and we hope to see the Scottish trucking community step up with their wholehearted support.”

The Thainstone Agricultural Centre is situated in the heart of Grampian, close to Inverurie and next to the A96 Aberdeen to Inverness Trunk route.

Exhibitors will be welcome from 4pm on Friday 17th April and vehicle booking entry, priced at £22.15, can be bought in advance from: http://bit.ly/Grampiantruckshow

Visitors will be welcome from 9am on Saturday 18th April, where tickets can be purchased on the gate.

Charlie House’s mission is to make life better for babies, children and young people who have life-threatening or life-limiting conditions, and to support their families and loved ones.

The STV Children’s Appeal helps children and young people in Scotland who are affected by poverty by providing practical help like food and warm clothes; creating opportunities for training and employability; and enabling social and emotional support for those who need it most.