Surround a Town ‘so important’ for road safety in Essex

An ‘astonishing’ 298 speeding offences were detected during a recent ‘Surround a Town’ day in the Essex town of Harlow. 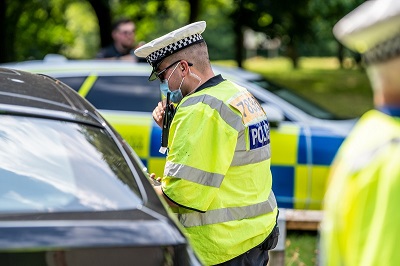 Organised by the Safer Essex Roads Partnership (SERP), Surround a Town sees resources focussed on a tight geographical area, usually where there are high rates of collisions and casualties.

The initiative uses a combination of enforcement and engagement to highlight the importance of safe and legal driving.

The Harlow Surround a Town took place on 20 July and, during which police officers detect 298 speeding offences, the highest being nearly 70mph on a 40mph road.

In addition, 45 people were found not wearing a seatbelt, 13 had no insurance, four were pulled over for careless driving, two had no valid MOT – and officers also found 21 offences involving HGVs and caravans, such as being overweight, long driver hours and having no mirrors. Two e-scooters were also seized.

The engagement team based themselves in the town centre and interacted with hundreds of shoppers to promote free ‘Driving with Confidence’ courses for older drivers, as well as road safety activity books for children.

Samantha Wright, road crime operational coordinator at Essex Police, said: “This was a very busy day for the team, and we were shocked to see so many offences, including nearly 300 for speeding.

“One of the themes that came out of the day was that many drivers haven’t been sufficiently maintaining their vehicles during lockdown to ensure they stay road worthy.

“Shockingly, a man in his 30s with no insurance attempted to buy insurance on his phone while officers were engaging with him. Insurers will never back-date insurance, so it was obvious what he’d tried to do. He had to make his own way back to London without his car.

“Our Surround a Town events are so important, and we’ll continue to run them regularly across the county. These high visibility operations are to keep road-users safe and to spread the message that no death or serious injury is acceptable on Essex roads.

“We want to thank all those in Essex who use the roads safely – together we can work together to achieve Vision Zero.”