How louts dumping litter on M6 were caught

Video footage released by Highways England reveals the moment litter louts caught dumping rubbish on the M6 were then ordered to clean up their mess by police. 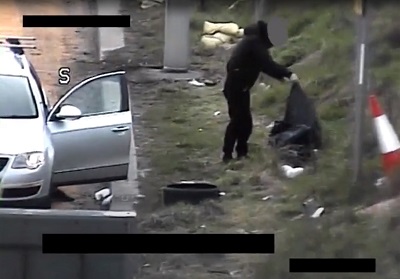 The culprits were travelling northbound through Staffordshire when they decided to pull into an emergency area – designed to help motorists reach a place of safety in the event of an emergency – to empty food packets and other rubbish from bin bags.

But they failed to make a clean getaway thanks to eagle-eyed control room staff at Highways England who were watching them on CCTV.

The team quickly notified Central Motorway Police Group (CMPG) who intercepted the offending vehicle and escorted the culprits back to the emergency area to tidy up their mess.

Highways England’s senior network planner, Frank Bird, said: “This was a blatant and reckless abuse of one of our designated emergency areas which are there to help people in the event of just that, an emergency.

“We watched the whole incident unfold on our CCTV system in our control room and then quickly passed it to the police who were able to stop the vehicle and escort them safely back to the emergency area to tidy up their mess.

“We continue to work closely with our police colleagues who enforce issues like this and we’d remind people to take their litter home and dispose of it safely.”

PC Nick James, from CMPG, was one of the officers that dealt with the hapless offenders.

He said: “We’re grateful to our colleagues at Highways England for their speedy notification of the incident and we quickly found the vehicle which was travelling on the M6. We were able to escort it back to the scene – roughly around a 40-mile round trip – so they could pick up their mess.

“The rubbish was mainly things like takeaway wrappings and plastic bottles which can be easily recycled or disposed of safely at home. We reminded the culprits that stopping on a motorway to drop rubbish off isn’t the smartest move, especially when they’re being watched on CCTV.”

Along with a stern word in the ear of the culprits, their details will also be forwarded to Environmental Health officers for their information so should any future incidents occur there will be a recorded history.

Litter is a serious issue; it’s unsightly as well as a risk to wildlife and the environment.

The RSPCA received 7,400 calls to report incidents of animals injured because of litter in 2018.

The incident – which took place on March 28 – is being used as a timely reminder about the dangers of littering which puts our workforce at risk when they have to go out and collect it.

And today Highways England is calling on drivers to ‘be part of the pick’ and join them in doing their bit to reduce litter levels on the nation’s motorways as part of the Great British Spring Clean (28 May-13 June).

The Great British Spring Clean campaign takes place between 28 May and 13 June, however, Highways England picks litter throughout the year. Highways England is responsible for collecting litter on motorways and a very small number of A roads. Responsibility lies with local authorities on all other roads.

During last year’s Great British Spring Clean Campaign, we collected 12,000 bags of litter from the network.

Highways England’s Head of Customer and Operational Requirements, Freda Rashdi, said: “We’re urging road users to save litter for the bin.  Litter picking costs time and money and doing this diverts resources that could be used to improve the network. If people didn’t drop litter in the first place it wouldn’t need to be picked up. We also work with partners such as Keep Britain Tidy to improve our understanding of why people litter, and to prevent littering in the first place.”