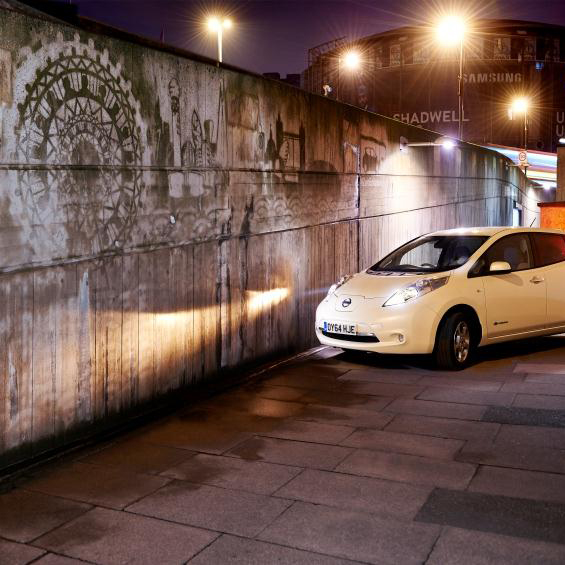 The Nissan LEAF with Moose’s handiwork

Nissan is highlighting London’s battle with air quality by using the 100% electric Nissan LEAF – the world’s best-selling electric vehicle – to power a striking piece of street art in Waterloo, London that depicts the Capital’s iconic skyline.

Unlike traditional graffiti, Moose creates his art by cleaning dirt off surfaces using a jet washer or wire brush, leaving a striking design in negative on the wall. Much of the dirt is caused by exhausts emissions, levels of which often exceed guidelines and limits in busy areas of London and other European cities.

The artwork – which is on show in the subway on Station’s Approach, Waterloo – includes a host of London’s most famous landmarks including Buckingham Palace, The Shard, Battersea Power Station and The London Eye. Produced to highlight the growing issue of poor air quality across Europe’s biggest cities, it aims to showcase how much cleaner they could be if more people adopted electric vehicles.

Jean-Pierre Diernaz, EV Director, Nissan Europe, added: “This piece of art is a striking call to action that air quality is one of the biggest issues facing the citizens and visitors of Europe’s largest cities today. It is a reminder that electric vehicles don’t have an exhaust to emit the kind of air pollution which has stained the wall Moose has created his piece on.

In a world-first, the jet washer used to clean the wall was powered by the Nissan LEAF via the LEAF to Home equipment – a portable device that converts electricity from the car’s battery to provide as much as two days-worth of power to a household on a single charge.

The campaign will place Nissan at the heart of the debate, leading the call for clean air and smarter cities.

“I’ve been using reverse graffiti for fifteen years now, in fact I named it. My whole ethos is about highlighting the amount of pollution we endure daily using a very positive harmless method that never fails to ask questions about what we accept and what we shouldn’t accept in our environment. For these reasons I was keen to be involved in this project,” explained Moose, who originates from Leeds.

“It’s a pleasure to be given the opportunity to create public art in this way and I’m very pleased with the iconic simplicity of the mural and its message.”

Nissan has revealed the pricing structure for variants of

Boroughs hit out against UL...

Two of London’s boroughs have expressed strong opposition to