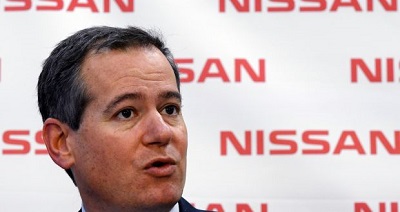 No-deal Brexit tariffs of 10 per cent on vehicles would be unsustainable for Nissan in Europe, where it runs Britain’s biggest car factory, the Japanese company warned on Thursday.

The automaker made nearly one in three of Britain’s 1.5 million cars last year at its northern English Sunderland plant, although annual production levels at the site will drop this year.

Nissan, which was encouraged by then prime minister Margaret Thatcher in the 1980s to use Britain as a gateway to the Continent, has spent £100 million on investment in a new Juke model, due to begin production next week.

But the auto sector, Britain’s biggest exporter of goods, is concerned that World Trade Organisation tariffs of 10 per cent on vehicles alongside new customs checks and delays could halt production if there is a disorderly Brexit on October 31st.

“If we are in a situation in which tomorrow we will have to apply 10 per cent export duties to 70 per cent of our production, the entire business model of Nissan in Europe will be in jeopardy,” the firm’s European chairman, Gianluca de Ficchy, told reporters.

“If there will be a no-deal – and a no-deal will be associated with WTO tariffs application – that won’t be sustainable for us,” he added. – Reuters