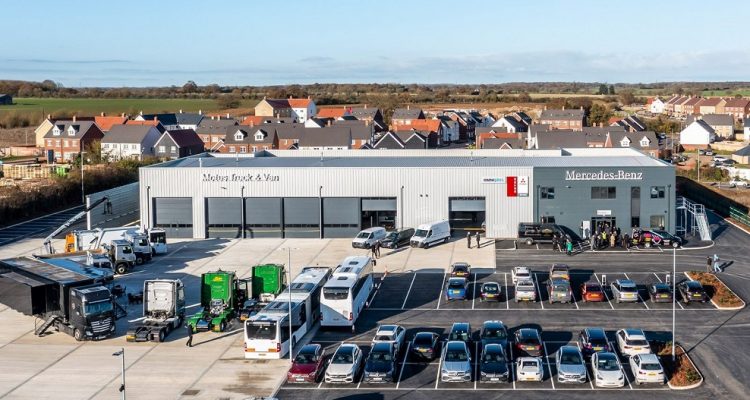 The latest addition to the Dealer’s branch network is perfectly located alongside a stretch of the A12 trunk road that runs between Chelmsford and Colchester. This is the primary route by which vehicles working in and out of the docks at Felixstowe and Harwich, reach London and the M25.

Motus Truck & Van hosted established and prospective customers, and representatives of the manufacturer, at a pre-launch showcase, during which they were able to tour the facilities and meet key members of its team. The feedback from those attending was resoundingly positive – all welcomed the Dealer’s progression as evidence of its commitment to keeping operators’ vehicles up and running.

The new centre is now open round-the-clock, from 6am on Mondays until 10pm on Fridays, and on Saturday mornings. Crucially, the three-acre site offers ample space for drivers to manoeuvre and park their vehicles.

The smart and airy reception area includes comfortable rest and meeting facilities, while the 700 sq m Parts department carries broader and deeper stocks of Mercedes-Benz GenuineParts than has previously been possible.

The heart of the 2,500 sq m building, though, is its fully equipped workshop. This has nine full-length truck and trailer bays – three of which have 22-metre pits – with another eight set aside for van maintenance and repairs. There is an Authorised Testing Facility in which inspectors from the Driver and Vehicle Standards Agency will carry out truck MOT tests, while the Dealer’s own van technicians will MOT vehicles in the Class 4 and 7 categories at times of the day or night that are most convenient to customers. 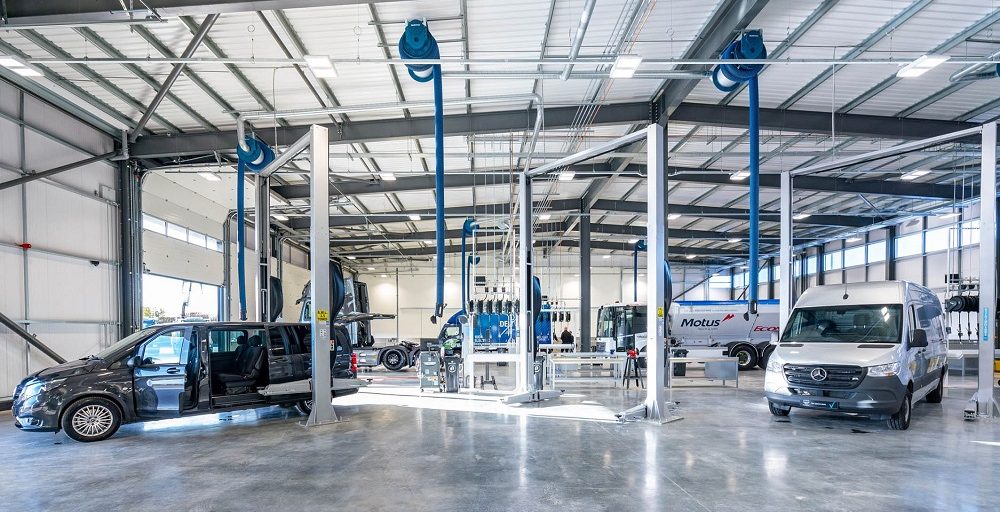 Speaking at last week’s open day event, Motus Truck & Van Managing Director Lee Seward recalled: “We began construction work just under a year ago, but this project has been a lot longer in the planning. We’re delighted, therefore, to be welcoming our guests today, and to give them this opportunity to see for themselves a flagship development of which we’re all very proud.”

Lee said that while the new centre had been built and equipped to the highest standards, its single biggest attribute was its location. “This is an important area in which Mercedes-Benz has not previously been represented,” he explained. “It sits between our dealerships in East Anglia and at West Thurrock, and is going to play a big part in our growth strategy.

“The very substantial development here at Witham, and those underway at other branches, reflect our determination to provide customers with an experience and a level of service that matches the reputations of the brands and the quality of the products we represent.”

Among those touring the new aftersales centre was Steve Winter, Head of Fleet at Centrica plc, which has just ordered 165 Sprinter vans from Motus Truck & Van, for use by British Gas engineers responsible for installing central heating systems, heat pumps and solar panels.

“It’s a tremendous facility, and very reassuring,” he enthused. “This will be our first experience of operating Mercedes-Benz vans and having committed so heavily to the product, seeing a development like this gives me a lot of confidence that we can look forward to receiving the servicing and parts support we need.”

A driver for 21 years, Clive Wrathall, of Witham-based Crittall Windows, arrived in his Actros 2545 tractor unit. “I have a great rapport with the technicians at the Dealer’s Ipswich branch,” he declared. “This new facility will make life a lot easier, though, as it’s so close to us. I’ve had a walk around and it’s all state-of-the-art… absolutely fantastic. I’ll certainly miss the guys at Ipswich, but I’m sure the service here will be every bit as good.”

“We’ve previously relied on the Dealer’s Stansted and West Thurrock branches, but will be coming here from now on, as it’s a lot closer,” said Mr O’Connell. “The  place is a lot bigger than we’re used to, with plenty of parking space. It’s also very smart. I particularly like the reception area, which, rather than being overly commercial, has a relaxed, retail-type feel that’s sure to appeal to a lot of van customers.”

SRC Aggregates, of Dunmow, runs more than 120 trucks, most of which are by a Swedish manufacturer. However, the fleet also includes a dozen Mercedes-Benz Arocs eight-wheelers, a combination of mixers and tippers – these have been maintained under Complete Service Contracts at Motus Truck & Van, Ipswich.

The operator’s Transport Manager Matt Parker and Service Administrator Nicole Todd welcomed the Witham development, which they said would have a positive impact on their business. “All very impressive, and a lot more convenient for us,” confirmed Mr Parker, while Ms Todd added: “It’s great to see the Dealer opening in such a prime location, while given the size of the workshop I’d like to think we’ll be able to get a truck in at short notice if we need to.”

Meanwhile, as the company’s new trade hub the Witham Parts team also makes urgent and other deliveries to own account and independent maintenance facilities, garages, mechanics and others throughout Essex, Suffolk, and parts of Hertfordshire.

Mercedes-Benz Trucks Head of Network Development Mark Williams said: “It’s great to see Motus Truck & Van opening this exceptional facility, which underscores its commitment to operators and represents another big step forward for our ever-improving network.
Mercedes-Benz Trucks’ Customer First strategy is focused on ensuring that points of representation are in the right locations and easily accessed. Witham ticks both boxes admirably.”

Derek Clelland, Head of Network Operations at Mercedes-Benz Vans, commented: “Motus Truck & Van is a key partner for our brand. This exciting development aligns perfectly with our Future Network Strategy, under which the Mercedes-Benz Vans business is adapting to meet the demands of an evolving market. I have every confidence that those using the new centre at Witham can look forward to an experience that meets the highest standards of customer care.”