Leading independent builders’ merchant James Burrell became one of the first UK customers for the new-generation Mercedes-Benz Arocs when it commissioned a single six-wheeler last October – it is now running four more identical trucks and has just ordered a further six. 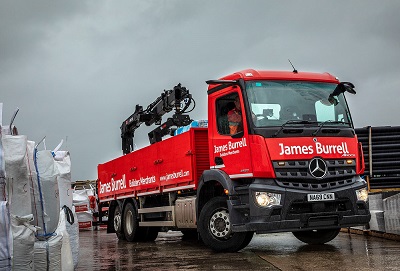 The Gateshead-based company, whose fleet is dominated by vehicles bearing the three-pointed star, operates from a network of 10 branches located throughout the North-East and Yorkshire.

It offers a high-quality range of heavyside, building and civils materials, as well as timber, roofing, dry lining, insulation, and joinery products, and landscaping tools and hardware. Each day its 36 trucks – the majority of them 26-tonne Mercedes-Benz dropsiders with cranes – deliver in excess of 1,000 tonnes of material.

The muscular Mercedes-Benz Arocs is purpose-designed for construction-related applications. Supplied by Dealer Bell Truck and Van, James Burrell’s latest 2532 L models have ClassicSpace S-cabs and are easily distinguished from previous variants by the absence of mirrors. Instead, they are fitted with the manufacturer’s revolutionary MirrorCam system, which offers much-improved all-round visibility, as well as increased fuel-efficiency thanks to the compact and streamlined camera housings.

Other new features include the stylish Multimedia Cockpit, which replaces conventional switchgear with twin screens – the upgraded interactive version specified by James Burrell comes with a larger 12in instrument panel and extra functionality – and Active Brake Assist 5 emergency braking technology.

Whereas its predecessor relied solely on radar, the new system employs a combination of radar and cameras that deliver, at speeds of up to 50 kph, a dramatically improved response to moving pedestrians. Active Brake Assist 5 can now employ full braking – as opposed to the 50% achieved previously – when encountering pedestrians crossing its path. 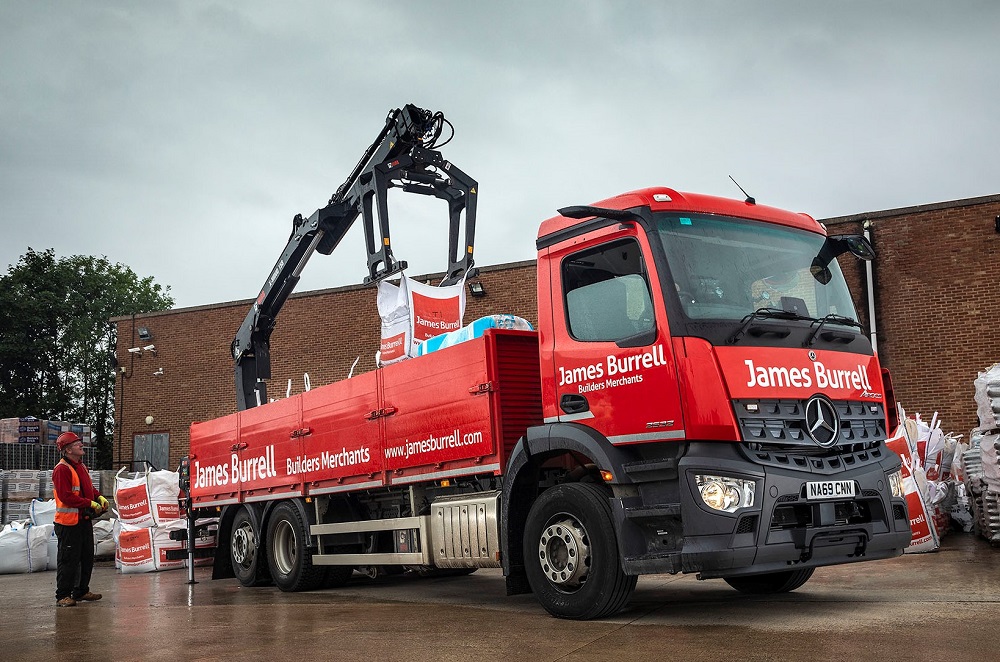 James Burrell has held Bronze accreditation from the Fleet Operator Scheme (FORS) for several years, but its sights are now set on the next, Silver level. “With their comprehensive safety specifications these impressive new trucks can only help us to achieve this goal,” said Assistant Transport Manager Graham Johnston.

“The feedback on MirrorCam from our drivers is overwhelmingly positive. They tell me the images relayed to the screens on the truck’s A-pillars are crisp and bright, and that they can see a lot more of what’s going on around them, with fewer blind spots, than would be possible with normal mirrors.”

The Arocs are fitted with bodywork by Dependable Bodies, also of Gateshead, and rear-mounted Hiab cranes that work with brick and block grabs. Their 7.7-litre in-line six-cylinder engines produce 235 kW (320 hp) and are proving impressively economical.

“The new trucks are certainly pulling out some very good mpg figures,” continued Mr Johnston. “It’s difficult to be precise because so many variables come into play. Obviously, routes and loads differ, while the cranes are driven by the engine PTO (power take-off) so also consume fuel when they’re working. But at 10 mpg our latest Arocs look to be between 1.2 and 2 mpg ahead of the fleet average, which is very encouraging.”

The next six trucks, which are due to enter service next spring, will also be Mercedes-Benz Arocs 2532 Ls with dropside bodies and cranes, but in a new departure they will have steered rear axles for enhanced manoeuvrability.

Family-owned James Burrell has been trading for more than 140 years. The company has long-standing links with Mercedes-Benz, and a photograph of one of its trucks from 1988 hangs in its head office.

“Mercedes-Benz has consistently accounted for the majority of our vehicles for years,” said Mr Johnston. “The manufacturer has always led the way in terms of innovation, while its products have traditionally been competitively priced and great all-rounders.

“Our Mercedes-Benz vehicles are exceptionally reliable and easy to maintain, and we benefit from Bell Truck and Van’s excellent parts back-up, all of which helps to ensure that the whole-life costs of operation stack up well.”

The Dealer’s Truck Sales Executive Alex Wordsworth has managed James Burrell’s last two orders. Mr Johnston added: “Alex knows our business and understands what we need in terms of a vehicle specification. He also relieves us of hassle by liaising with the bodybuilder and crane supplier, to provide a seamless service.”