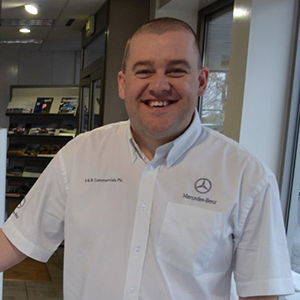 Within a year, he had progressed to Retail Sales Executive accruing local Borough and District Council tenders for Kings Lynn and Fenland; when Ford & Slater acquired the DAF/LDV business in the Norfolk area, James was offered a coveted sales position in their Peterborough office.

In 1999, due to the strong relationships he’d built with retail business and Councils in Peterborough, he came to the notice of TC Harrison, the Iveco dealer for East Anglia.

Within his first three years, James had been awarded ‘Top Sales Executive’ by Iveco twice, winning trips to Sardinia and China to recognise his success; in addition, during the same period, the manufacturer invited him to their factories in Italy and Spain.

Experiencing different cultures and working practices during these trips whetted James’ appetite for travel, and in 2002 he took a work sabbatical to travel the world, visiting the Orient, Australia, Canada and Europe, before returning home to Peterborough and his role at TC Harrison.

In the next ten years, James strengthened his relationships with local retail business adding Grafton Merchanting (Buildbase/Plumbase etc.) and Ridgeons to his burgeoning portfolio along with further tendering for Peterborough and Cambridge City Councils.

In 2013, James brought his wealth of knowledge and relationship building skills to the fold at S&B Commercials to strengthen business in the fleet van sales sector.

James is married with a three-year-old daughter and in his spare time he can be found on the terraces at Peterborough United FC, on the piste during his annual trip to the slopes or planning his next European F1 adventure.