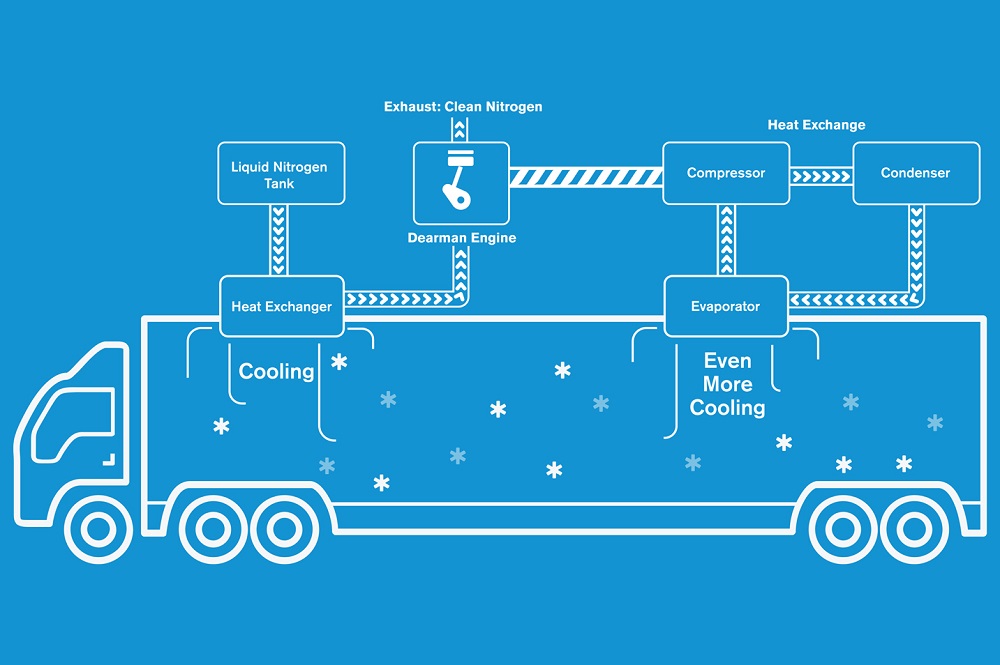 Paul Polman, then-CEO Unilever, said: “Great partner with Unilever & Dearman working to our goal of making our transport system as green as possible – win for the environment and for business”

Diesel refrigeration- using standalone diesel generators- are highly polluting, noisy and not regulated as strongly as the Euro 6 engine in the tractor unit pulling the refrigerated trailer.

Liquid nitrogen refrigeration is nothing new, but the technology that simply circulates the liquid nitrogen inside the refrigerated container and then releases the gas into the atmosphere fails to maximise its benefits.

The reason the Dearman liquid nitrogen refrigerated transportation system is so much more efficient, than competing cryogenic transport refrigeration units, is because of the revolutionary Dearman Engine.

The Dearman Engine uses liquid nitrogen and water/glycol (non-toxic poly-ethylene glycol, also used for de-icing roads) to drive the piston of the engine, by capturing the expansion of the liquid nitrogen gas.

The main cooling power is from the liquid nitrogen, the Dearman Engine- using a mixture of heat exchange fluid and liquid nitrogen- provides a secondary cooling circuit, maximising the gases efficiency and the cooling efficiency.